I started writing my next story about Fizdale right after the Dallas game when things were looking good. Was going to do a deep dive into his career, found some great pics from his San Diego days. But had to reassess the direction of the article after Fizdale and the Knicks laid an egg at the Garden against Cleveland. Thanks Coach !! The Knicks have reached a ‘come to Jesus’ moment just 10 games into Fizdale’s 2nd season. It is starting to feel like the same old Knicks, hyperbolic reactions from Dolan after bad performances. The black cloud seems to be hovering towards MSG again. The front office is looking for cover and starting to search for a scape goat in order to save their own necks. But the question I pose to my fellow Knicks fans is. Aren’t we tried of the same old bullsh*t? Change for the sake of change!

Look, I am one of the 59% of our followers polled that said they were excited about Fizdale when his hire was announced,   KoT Poll – Fizdale Hire . I was and still am one of the 76% of the followers that were against firing Fizdale,  KoT Poll – Fire Fizdale?  . Both polls were taken before the Dallas game. I am sure if we would have polled fans about Fizdale after the Dallas game, almost 90% of fans would have been against firing the guy. Let’s be clear, I have not liked the way he has coached the team. I am especially disappointed in the way he has handled Frank’s development. But to be fair and objective, I do like how he has handled the development of Perry’s picks; Knox, Robinson and Barrett. But this observation leads to another question. How much of the blame falls on Fizdale? Is he being handed down marching orders that are making his job harder? Before we get into that, let’s examine Fizdale and his situation. 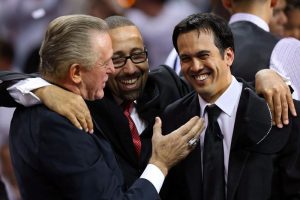 Fizdale made his bones as an assistant coach for the Miami Heat. He spent 8 years learning under one of the best coaches and organizations in the NBA, Erik Spoelstra and the Miami Heat. However, he doesn’t coach like someone that truly believes in the Heat’s core values. They are the hardest working, best conditioned team in the NBA and prioritize character and defense. They don’t put up with any B.S. from their players and don’t play guys that don’t give effort on defense. Does that culture and mindset sound familiar? It should because it was developed by the same man that laid the foundation for the last great run in Knicks history, that man is Pat Riley. Before he famously faxed in his resignation and left for Miami, he instilled that same culture and mindset in New York in the early 1990s. He led the Knicks to the NBA finals in 1994 and left a culture in place that helped his former assistant coach Jeff Van Gundy take the Knicks to another NBA Finals in 1999. So why is Fizdale not following the blueprint?

Let’s be real, for Knick fans that are old enough to remember the early 1990s, all coaches that have been hired by this team since have been compared to Pat Riley. He is the gold standard. That is why I was excited about the Fizdale hire; he had learned from the master himself. When Pat Riley was hired he still had a lot to prove even though he had won 4 championships. A lot of people dismissed his success because his Laker teams were stacked, and he didn’t look the part. He was a trend setter; he was the first coach that dressed in designer suits and used hair gel. Back then coaches wore cheap suits and didn’t worry about their appearance. I guess they thought that gave them more creditability. Anyway, New York was thrilled to have a coach with a championship pedigree, especially since star big man Patrick Ewing was fed up with the team and was asking for a trade. Sound familiar?

Now enter Fizdale. He comes in as the next hot young coach despite his disastrous 2nd season in Memphis. Normally a guy that just got fired, especially for clashing with the team’s star European big man would not be consider for the Knicks’ job. New York is the biggest market in the NBA and the franchise player is a European big man. It looks odd from the jump, but Fizdale had great personal references. He has LeBron James and Dwyane Wade’s stamp of approval. Also, he got, yes you know, Pat Riley to go to bat for him. Riley spoke at length with Mills about Fizdale. Why Mills is trusting one of his rivals on a coaching hire seems odd. But nevertheless, I truly believe Riley was genuine in his praise of Fizdale. Again, it doesn’t seem wise for Fizdale to go against what got them hired.

To be fair to Fizdale, he was dealt a bad hand. A coach’s success is dependent on the players he’s got. All the great coaches had great players. Riley came to New York because the Knicks had Patrick Ewing. Riley never won a championship as a coach or executive without the best players in the league on his team. The same can be said of Phil Jackson, Gregg Popovich and Steve Kerr. The players make the coach look good. One of the reasons the Knicks job was so appealing was because of Kristaps Porzingis (KP). Nobody wants to fail, especially in New York. Part of the allure of the Knicks job was coaching KP. Everyone thought it was going to be a quick rebuild because KP was going to return the following season. Unfortunately, the script got flipped on Fizdale and he never got to coach KP. We may never know the reason why KP wanted out. It could have been because he didn’t believe in Mills or maybe it was Fizdale. But you got to figure that the guy that was fired from his last job for not getting along with a Euro player would try his hardest to ensure that the same thing happen with another. Right?

Fizdale had success in Memphis when he had good players, his 2nd season went down the drain when Mike Conley got hurt and he didn’t have a good back-up point guard. The guy might not be a great coach, but he is at the very least solid. My personal critique of Fizdale is that he is trying too hard to show that he is up to date with the latest NBA trends. Not sure if he is scared of being labeled as another Mark Jackson, but in hipster glasses. Nevertheless, he is a trend follower, not a trend setter like Riley. He is complicating things by constantly changing the rotations and asking guys to do things that are out of their skill set, just to keep up with what other teams are doing. When Riley came to the Knicks, he scrapped the showtime Lakers fast break offense and switched to a defense oriented approach because that was the best way to maximize the talent he had. He didn’t try to change Ewing, Oakley, Mason or Starks game. Instead he built around them.

My solution might seem odd but hear me out. What I think the Knicks need to do is hire better assistant coaches, preferably ones that have head coaching experience. It’s not a knock on the current staff, but Keith Smart is the only one that has full-time head coaching experience. Most of the assistants specialize in player development; Buechler, Canales, Ivey, Sullivan and Miller. All I know is that assistant coaches are just as important as the head coach. Riley had the Van Gundy brothers and Spoelstra along with some coaches and staff that have been with the Heat for almost 20 years. Phil Jackson had the architect of the triangle offense Tex Winters at his side in Chicago and Los Angeles. Steve Kerr has Mike Brown and Ron Adams in Golden State. Even the Lakers that are known for being cheap got Frank Vogel two assistants with head coaching experience; Jason Kidd and Lionel Hollins.

I also suggest that the Knicks hire at least one consultant. They still have Clarence Gaines on the payroll as an advisor. However Mills, Perry and Fizdale are all fairly new to their roles. They could benefit from having a Jerry West type in the organization as a sounding board. Unfortunately most of the names I came up with have at one point worked for the Knicks and you guessed it, were fired by them. Go figure! They need someone that is not a threat to take their jobs and whose advice they trust. I think someone like George Karl could help. Bernie Bickerstaff who is currently an advisor for the Cavs is someone Fizdale considers a mentor, he might work. Everyone has blind-spots, someone trusted with experience could help both Fizdale and the front office identify those blind spots.

One of the advantages the Knicks have is money. Why not go the Alabama football route and hire more smart minds to help support the coaching staff and front office? Alabama has the best assistant coaches and analysts in college football. I say hire not fire! The revolving door strategy hasn’t worked. Let’s do the opposite for a change. Its more cost effective, plus imagine the optics around the league. Knicks expect a lot from their people, but they give them the best support staff possible to get it done.

Knicks are going back to the future – Jonathan Macri