Trading spins for wins. Could a Julius Randle Trade upgrade the Knicks?

Since February’s trade deadline, we have heard sources inside the Knicks say they are open to dealing Julius Randle. Most fans would categorize his stint with the Knicks as rocky. He doesn’t shy away from the most predictable go-to move in the league. His spinning and turnover tendency seems beyond re-teaching. I wanted to explore 3 trades that can happen this summer involving Julius Randle. 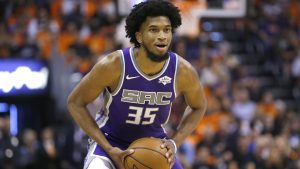 Knicks would be bailing out the Kings franchise and saving Vlade Divacs job. The point of this trade is to help set up the Kings for some future flexibility. Sacramento gets what amounts to be their future replacement to Buddy Hield in Reggie Bullock. Knicks would be trading a healthy Julius Randle for an oft-injured Marvin Bagley. Knicks would give their 1st round pick next year (protected) on the potential of Bagley. If the Knicks have a horrible year they most likely keep the pick and the 2022 1st rounder becomes the Kings pick. Why would the Kings trade a player who was drafted ahead of Luka Doncic 2 years ago? Sacramento has a lot of hard decisions to make with this roster. Bagley could be one of those tough decisions that make them ultimately a more flexible team in the future. Knicks further aid by offloading a bad salary off their books. They have way too many big salaries on the books currently. They are faced with more worthy player’s big looming extensions in the next 2 years. There probably won’t be a way to afford Bagley in a few seasons without ignoring the consequences to the cap.

The Kings would be giving up a player with potential, but who has been riddled with injuries. The Knicks need his skillset at the height 6’ 11”. Knicks need a player to groom next to Mitchell Robinson. It also helps that their individual games complement each other well. I think it’s an acceptable risk while the Knick’s expectations are low.

Let’s unpack this trade. Charlotte would open to trading Rozier with the emergence of Devonte Graham. They are smallish guards which makes them both more suited for PG. The Hornets have needed scoring upfront for quite some time. Cody Zeller hasn’t become the scorer they had hoped. Knicks give them a rock-solid 20 and 10 forward in Julius Randle. Randle has been healthy since his rookie year and that’s something Charlotte needs. Yes, his tendency to hold the ball is a little concern. If they can tweak his game they should be a playoff team. Knicks would have no intention to keep Zeller but his expiring deal can be flipped midseason if need be. Charlotte takes on a native son in Dennis Smith. New York isn’t for everyone. Hopefully, he could play more free in a less intense situation.

Victor Oladipo is the guy who would be perfect for the Knicks if they land Lamelo Ball. Victor Oladipo is also the guy who would be perfect even if they don’t draft Lamelo Ball. He is somewhat of a PG/SG hybrid, but in a good way. He would relieve a lot of pressure off of RJ Barret with his great shooting and dribble penetration. The Knick’s current offense is often too stagnant. Knicks can afford a large 3-year extension if this lineup pays out dividends. Jalen McDaniels would be a young guy to sit at the end of the bench and learn for the time being. Hopefully, we will have a coach who can develop.

Indiana loves Victor Oladipo’s heart, but they are not in love with his quad or potential future paycheck. He’s coming off an injury that can affect explosiveness. That being so they didn’t extend a big offer. Instead, they insulted him with a lowball offer. Since it was lower than his current pay it was definitely an insult. They could’ve waited for the end 2020-21 season to make a serious offer. If so, they would be left with only 2 choices. #1 competing with other offers which would be Max offers. #2 letting him walk with nothing tangible in return. At this point, they should deal him or extend a max deal. This trade alleviates all those problems. They receive a young scoring PG who plays both sides of the ball. They also receive 2 draft assets to ease those looking toward the future.

The Clean Break (Knicks and Hornets)

This is the trade that simply gets Julius Randle off the Knicks books. The positive byproduct is it gives Scott Perry and Brock Aller about $2.5 million more dollars to use in the free-agency fund. The Knicks potentially gain another draft pick at the beginning of the 2nd round in this draft. This would have to be a draft-night trade. The Knicks also would be sending strong signals that they have big designs in free agency. Not too many teams can afford to dump a 20 and 10 player.

Charlotte just has no punch upfront. They were hoping Zeller was going to evolve into a bigger scorer, but he hasn’t. They can take a calculated gamble on Randle and see how his scoring can mesh with what they have currently. If it’s a failure they let him walk. If it succeeds they should be a playoff team next season. It’s a possibility they can even bring Zeller back on a more reasonable contract at the end of next season.

I would love your thoughts on these trades. Julius Randle has value. Do you think Julius would be better dealt or retained? How do you see this summer playing out?