This article is by no means an indictment of Julius Randle’s prodigious skill as a basketball player. He is, has proven to be, and will continue to be a great basketball player. Randle is built like bull. He blends athletic prowess with a soft touch. He is uncommonly graceful for someone of his stature. He has, however, crashed headfirst into a problem (not dissimilar to how he has consistently crashed headfirst into opposing rim protectors this season) since joining the New York Knicks as the organization’s prized jewel of the offseason: he has not fit within the offense and the offense has not fit with him.

After what was a categorically disappointing offseason for the Knicks given the lofty expectations the organization set for itself, Randle was one front-office find that beleaguered fans could seek solace in. Coming off a career year with the Pelicans, Randle solidified himself as an exciting, young talent in the league; a 24-year-old with an improving jump-shot who could attack the rim and has improved each year. His slow start to the year has been a sore spot for fans. His frequent tenure as “Point Randle” has at times been both very frustrating and confusing. Stats not only tell the story as to how Randle’s first month of the season has been atypical, but they also illuminate ways that the thus far putrid offense can be fixed.

Last year, in Randle’s only season with the Pelicans, the big man posted an offensive rating of 113, per basketball-reference. This means his offensive impact in the 2018-2019 season was on par with the likes of CJ McCollum and Bradley Beal, and above his then-teammate Jrue Holiday. 15 games into the 2019-2020 season, and Randle is posting a pedestrian 102.8 offensive rating, per NBA Stats. This is good for 296th in the league. Players with higher offensive ratings this season who are also averaging more than 30 minutes per game: Luke Kennard (108.1), rookie DeAndre Hunter (107.3), T.J. Warren (106.3), and Terry Rozier (103.0). Randle’s shaky start plotted on a likelihood scale falls somewhere between unexpected and James Dolan selling the Knicks.

Almost everything about his fit in a more heavily featured role seems off. He is shooting less field goals per game than last year (14.1 FGA/game), but his field goal percentage is down (44.3%). He is taking a career high in three-point attempts per game (3.6 3PA/game), but he is clanking them far more often than last year (25.9% on three-pointer attempts). His three-point shot profile consists almost exclusively of shots above the break, usually reserved for more consistent sharpshooters. He is getting to the line at the lowest rate of his career since the 2016 season. These issues were on full display in a devastating loss to the Spurs, a game the Knicks could’ve won if not for Randle’s struggles. It doesn’t take much else to infer that his shot appetite has changed, and, for a 6 foot 8, 250-pound behemoth, that isn’t always a good thing.

Rather than bringing the ball up himself, Randle benefitted last year from playing with Jrue Holiday, an assertive point guard. Indeed, last year he and Jrue posted a +4.8 points per 100 possessions and were the second most used pairing on a team that went 33-49. The record here is important to note, as the rest of the team was not spectacular, but Randle was still able to contribute effectively. For reference, the Knicks’ second most used 2-man combination featuring Randle is he and Morris, posting -3.5 points per 100 possessions.

Point Randle leads to shots coming far too early in the clock and shots that don’t come in the flow of the offense. In last Wednesday’s game against the Sixers, one in which Randle was featured HEAVILY (and controversially in place of Ntilikina during crucial stretches of the game) at point guard, an inordinate amount of the Knicks’ offense featured one or no passes. Not all of this is on Randle (Dennis Smith Jr. was far from trigger shy in another encouraging offensive outing against the Sixers) but ask any U12 travel basketball coach: possessions with no passes are ineffective (echoes from my youth basketball career ring in my ears). His eruption against the Cavs was encouraging but was propelled by hot shooting more so than schematic changes. 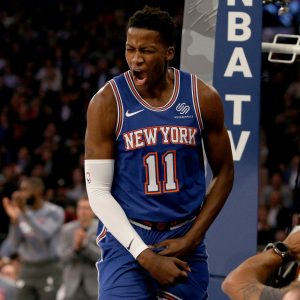 Why try to reinvent the wheel here? Not only do the Knicks have an increasingly (!) competent point guard in Frank Ntilikina (maybe you’ve heard of him), but they also have Elfrid Payton soon returning from injury, a member of the very same 2018-2019 Pelicans. Instead of Randle bringing the ball up, use Ntilikina’s newfound confidence and improved playmaking to find other ways to get Randle involved in the offense. He projects as an elite pick-and-roll screen setter. Randle can be someone who can knock help defenders over on a dive as well as a roller with a knack for playmaking who can make smart decisions when he gets the ball at the top of the key. Giving him a head of steam from a roll would mitigate a lot of the issues he is running into (sometimes literally) while trying to go one-on-five. Currently, Randle is on pace to shoot close to 50 more shots from 10 feet out to the 3 point line this year than he did last year. Replacing these shots with popping or corner threes, despite his currently low percentage, would be preferable given the Knicks unintelligible mission to jack long twos. He shot very well at the rim last year and that should be a priority for him now.

The Knicks’ early offensive struggles should not completely be blamed on Randle. Instead, it falls on the coach to establish a more effective offensive identity. Coach Fizdale’s emphasis on the transition game this last week has been a step in the right direction, and plays to Randle’s strengths. For any progress to be had in the half-court, the Knicks are going to need to change the way the team handles Julius Randle, its most established talent.

Watch the Knick of Time Show Every week on YoutTube.com/theknickoftimeshow. Feel free to subscribe!

Ryan G. - November 1, 2018
0
Despite allowing another game to slip from their grasp late, there are still some positives to take from the game. The production from New York's young cast continues to shine.