To all our weekly readers, it’s a crazy time we are living through. I never thought there would be a period in my lifetime when there would be no sports to watch or follow. So while the world is on pause I figured we could go back in time and review the past since we can’t discuss the present. Let’s take a look at  the Phil Jackson era. While we can’t fix the past, we can learn from it and try not to make the same mistakes.

The other reason for rehashing the past is just to point out that things are never as hopeless as they appear. For all their incompetence, the Knicks have been a couple of small moves away from being very good. Will there be people that will dismiss what I am about to say? Of course, with good reason, after all this franchise has turned us into a jaded fan base. But what could have happened was very likely, it’s the same way the Knicks built their last two finals teams. A couple of moves that appeared insignificant at the time ended up changing the team’s fortunes for the better. Let’s take a look

While the backbone of the team was Patrick Ewing and Charles Oakley, two of the other core players were castoffs acquired off the waiver wire. I am referring to Knick legends John Starks and Anthony Mason. This is exactly how the Nets started to build their core. They discovered Spencer Dinwiddie and Joe Harris the same way. Everyone in the league could have signed either one for nothing more than a minimum deal.

After the core of the 1994 Finals team had peaked, the Knicks turnaround and flipped them for players that became the core of the 1999 Finals team. The Knicks had just enough talent to seize the opportunity when it presented itself. The first was in 1996 when the Charlotte Hornets wanted to get out from under Larry Johnson’s contract and agreed to a trade for Anthony Mason. The second was in 1998 when the Golden State Warriors were forced to trade Latrell Sprewell due to the choking incident with his coach P.J. Carlesimo. The Knicks were able to take advantage of the opportunity and turned John Starks into Latrell Sprewell. The third also occurred in the 1998 offseason when the team was able to pry away a 24 year old Marcus Camby from the cash strapped Toronto Raptors team in exchange for a 35 year old Charles Oakley and cash considerations.

As you can see, the last two great runs in franchise history were fueled by a couple of low profile acquisitions that no one gave much thought to at the time.

As the disappointing 2013/14 season was coming to an end there was much concern about the team’s future. The team had mortgaged much of it to win now and Carmelo Anthony was the only real asset left on the roster and he had the option to become a free agent. James Dolan was under a lot of pressure from the fan base as his meddling was given as the main reason for the team’s failure. After relying on the McKinsey consulting group to steer the team’s strategy Dolan did an about face and turned over control to basketball legend and former Knick Phil Jackson. The fan base was ecstatic

However Jackson was doomed from the start. The first mistake Jackson made when he came on board was allowing Dolan to saddle him with Steve Mills as his GM. The second was feeling forced to re-sign Carmelo Anthony. The third of 2014 offseason was completely on him, it was rushing to hire Derek Fisher once his first choice Steve Kerr decided to sign with the Warriors instead.

The first thing Jackson should have done since he held all the cards was insist on hiring his own GM. This way he would have had someone with experience that he could trust to run the day to day operations while he learned on the job. He could have hired David Griffin, Michael Winger(now Clippers GM), Bobby Webster(now Raptors GM) , etc., instead of settling for an inexperienced Steve Mills. Phil Jackson should have also hired a former team president as a consultant to help him with the transition.

In hindsight, letting Melo walk or working out a sign and trade if possible would have been a better decision, however it wasn’t a realistic option at the time. But Jackson could have gotten Melo and his agent Leon Rose to settle for a partial no-trade clause. This way Melo would have the guarantee that he couldn’t be traded to a team he would not want to play for, while keeping all the other benefits that came with staying in New York. The Knicks included a 15% trade kicker in exchange for a small hometown discount on his salary. Also, the Knicks were the only team that could give him a guaranteed 5th season. So the full no-trade clause was not necessary, gave Melo too much power. This resulted in him challenging Jackson’s authority and it empowered him to resist the change to the triangle offense.

The next move that needed to be undone was the hiring of Derek Fisher as head coach for obvious reasons. They honestly should have just gone with Kurt Rambis from the start, even though he was not a flashy hire. He did have multiple rings as a player for Pat Riley and as an assistant coach for Jackson. They could have sold him as the guy that learned under two of the all-time greats, Pat Riley and Phil Jackson. Besides, who could hold his failure in Minnesota against him? No one succeeds there, not even Tom Thibodeau.

The next move that would have been great was if they had drafted Nikola Jokic or Spencer Dinwiddie with their 2nd round pick instead of Cleanthony Early. Who could have imagined that the trajectory of the team would have changed because of a 2nd round pick? For the sake of the story, let’s just say they drafted Jokic who went 7 spots later in the draft to Denver with the 41st pick. The Knicks could have had the passing center Jackson craved for when he signed Joakim Noah, but instead for pennies on the dollar.

The Knicks would have had a different strategy for the 2015 draft. The Knicks could have still drafted Kristaps Porzingis or better yet traded back for more assets and drafted Devin Booker who went to Phoenix with the 13th pick. They also could have used the assets from trading the 4th pick to get a pick at the end of the 1st round and selected Montrezl Harrell. That would have resulted in a core of Melo, Jokic, Booker and Harrell, not bad at all.

Even if that seemed like a stretch, let’s just assume they would have stayed with the 4th pick and drafted Porzingis. The Knicks would not have not drafted Willy Hernangomez if they already had Jokic. Instead they could have then drafted Josh Richardson who went to the Miami Heat 5 picks later with the 40th pick. Again, huge upgrade in talent available later in the 2nd round. 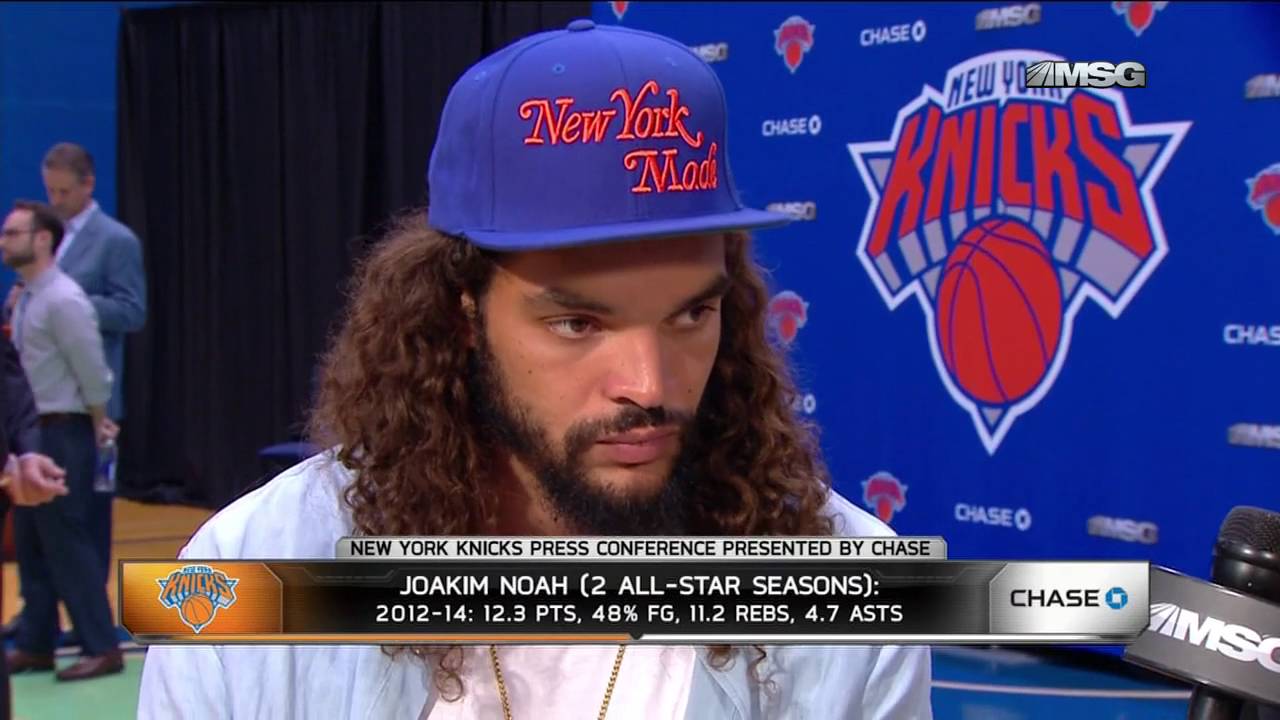 The Knicks didn’t have a 1st or 2nd round pick in this draft, so there is nothing we could have changed. But having Jokic and Booker on the roster would have helped avoid one of Jackson’s biggest mistakes, signing Joakim Noah. They wold have also not signed Courtney Lee. They also could have signed Spencer Dinwiddie to a minimal contract. The Knicks would have landed a nice young player that ended up going to their crosstown rival. The team could have invested the $122M over 4 years they spent on Noah and Lee on other players. Again imagine the Knicks having Dinwiddie and Harrell leading the second unit. It would be similar to what the Clippers have now with Lou Williams and  Harrell.

2017 Offseason – The same but different

It is most likely that the Knicks would have been a playoff team, especially since they play in the Eastern conference. However, it would have still been possible to draft Frank Ntilikina. There is a good chance that Frank would have fallen to the middle of the 1st round since the Knicks would not have had the 8th pick. The Knicks most likely could have traded up for a modest price to nab Frank. Let’s not forget Damyean Dotson, he would have still been available for the taking in the 2nd round. Fan favorite Luke Kornet still could have been signed as an undrafted free agent. Also, more importantly, Phil Jackson would have never allowed Steve Mills to sign Tim Hardaway Jr. to that 4 year $71M contract. A guard rotation of Booker, Dinwiddie, Ntilikina and Dotson would have been nice

Depending were the team landed in the draft, they still could have drafted Mitchell Robinson at the end of the 1st round or traded into the top of the 2nd round to draft him. Imagine the Knicks starting Jokic at center with Harrell and Robinson backing him up?

Who knows how things would have turned out in the summer of 2019, but it could have only been better than what actually happened. I would also bet that a squad with Jokic, Booker, Harrell, Dinwiddie, Ntilikina, Dotson and Robinson would have been attractive for a star free agent forward that was looking for a fresh start. Would have been been since to replace Melo, who’s contract would have just come off the books with a younger star.

Hindsight is 20/20 for a reason, it’s obvious. While most of the moves Jackson made at the time seemed sound with the exception of the Joakim Noah deal. The lesson learned is that you don’t need to make big flashy deals to get better. You just need to make a series of good decisions so when opportunity presents itself you can strike. The Knicks were a couple of small moves away from being better, a lot better. Hopefully Leon Rose will not succumb to the pressure of making a splashy move but instead make decisions grounded in sound judgement. Those moves will eventually create a gravitational pull that will attract the right kind of stars, the ones that desperately want to shine over Madison Square Garden.