It used to suck to be a Nets’ fan

It’s not easy being a Knick fan nowadays. Up until the last couple of years you could always tell yourself, “at least I am not a Nets fan”.

In 2017 the Nets bottomed out by finishing dead last in wins and attendance. To make matters worse, the Celtics claimed the rights to the Nets 1st round draft pick, 1st overall. Boston used a pick swap owed to them from the Kevin Garnett/Paul Pierce trade to deliver what appeared to be the final death blow to the franchise. But despite their historic level of failure the Nets picked themselves up and by 2019 completed one of the most improbable rebuilds in NBA history.

While that sounds like the Knicks’ worst nightmare, it actually is the best thing that could have happened. I know it sounds like crazy talk, but hear me out. Despite 20 years of failure, Dolan hadn’t been humbled until Kevin Durant and Kyrie Irving signed with Brooklyn instead of the Knicks. It was the slap in the face Dolan needed to get his sh*t together.

He kept thinking that the appeal of the New York market and the bright lights of Madison Square Garden were enough to attract stars. Even his biggest enabler, Steve Mills, said it. “The Knicks have always being looking to take shortcuts and skip steps”. But now Dolan realizes that the Knicks aren’t the only game in town and that he can’t afford to cheat the process anymore.

Too much money can be a bad thing

Let’s be honest, the Knicks have been poorly run for the better part of 40 years, even before Dolan owned the team. The problem is the insane amount of money the franchise generates. The revenue from ticket sales and television viewership has clouded the decision making process. That is why the Knicks have been one of the most impatient teams in the NBA.

But now that Brooklyn is championship level good, it is going to force the Knicks to get their act together. It’s true, competition brings out the best in people and that is what Knicks’ ownership needed.

Competing for the City is good

The Knicks now need to prove they are a competently run franchise that can develop their own players. The good news is that the franchise has started to do that. They also finally listened to the fanbase and started flexing their financial muscle to get the best possible talent off the court where there is no salary cap. The team’s front office and coaching hires are considered some of the brightest minds in the game. The Knicks have also drafted some exciting young players that at the very least will be good role players on a winning team.

But all that is not going to take away the sting from the Nets adding a 3rd superstar to their squad. The Nets’ star power is greater than any dream scenario that has been conjured up by the minds of some of the most diehard Knick fans. While it looks like the darkest of days for the Knicks’ side of the rivalry, there is a bright side.

Nets still have something to prove

While the Nets have gotten all the headlines because of their big name acquisitions. Brooklyn hasn’t been able to fully capitalize on the benefits of having star players. Last season Kevin Durant was injured and Kyrie Irving only played 20 games. This season is being played with no fans. So Brooklyn isn’t seeing the financial return on their investment at the gate. Most importantly there isn’t that electric atmosphere at the Barclays Center that you notice on television when you watch other championship caliber teams play home games.

The other thing is that while the Nets have acquired 3 stars, it doesn’t mean they will all gel together. Durant is the only one of the three that is used to playing in an equal opportunity offense. The other two, Kyrie and Harden are used to playing Iso-ball, were they are in control of how many shots they take. This season, when Kyrie and Durant have played together, Kyrie has taken more shots than Durant even though he is suppose to be the point guard.

Then there is likeability. None of Brooklyn’s stars have engaging personalities. Kyrie has already started causing waves. Durant is too sensitive and never seems to be happy for too long. Harden’s game is not fun to watch, he hasn’t gotten along with other stars in Houston. Also, Harden and Kyrie are not going to give much effort on defense. So while all 3 are great players, they are not the type of players New Yorkers love.

What can the Knicks do? 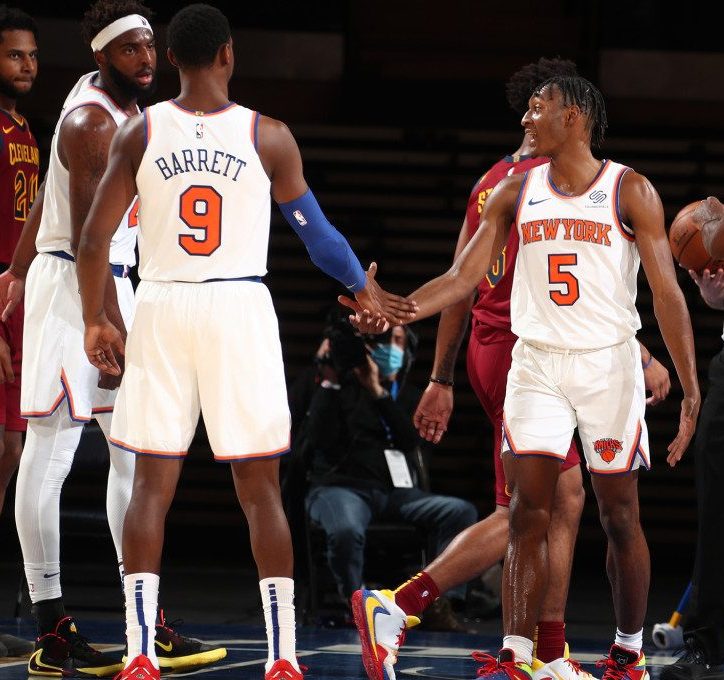 All this is good for the Knicks because no matter how good the Nets are, Flatbush will never be Broadway. The other thing to keep in mind is that both teams are on different timelines. The Nets’ core is older, Durant and Harden are in their 30s, so they are in win-now mode.

The next group of stars looking to relocate need to consider another team because of that. They will noticed how well Julius Randle is playing and now feel comfortable entrusting the Knicks with their own careers. They will also notice how much more popular Quickley, R.J., and Mitch are in New York than Kyrie, Harden and DeAndre Jordan. They will tell themselves, we can do better by playing on the other side of the river in Manhattan. We can own New York and the NBA if the Knicks can just keep building on what their doing this season.