Before delving into our weekly article we wanted to provide you an update on the Knicks’ playoff chances. While the Knicks have been mathematically eliminated from winning the division, being 25 games back with 25 games left, they can still make the playoffs. With some online sportsbooks reviewed here, giving the Knicks around +250,000 long shot odds of a miraculous comeback.

The Knicks are 8 games behind the 8th place Magic. They would need to win 18 of the last 25 games to have a chance. If the Knicks are going to make a run in the last third of the season, they will need a big contribution from this week’s topic, Mitchell Robinson!!

Now that the Knicks have safely navigated past the trade deadline, we can continue with our series on the young core. The second player we will cover is Mitchell Robinson, aka “The Block Ness Monster”, “Blockefeller Center”, “Mitchell Lobinson”, etc. You know your special if you have multiple nicknames. However, unlike the other promising young players on the roster, he was not selected in the lottery or even in the 1st round. The Knicks selected Robinson with the 36th pick in the 2nd round. It is hard for teams to hit on 1st round picks let alone 2nd rounders. If you look back through previous drafts there is maybe one really good player drafted in the 2nd round every two to three years. So, for a franchise that historically has not prioritized the draft, landing a player of Robinson’s caliber so late in the draft  is a gift from the Basketball Gods.

The funny thing is that when the Knicks drafted Mitchell Robinson I did not think much of it. Like I just mentioned, most 2nd round picks turn out to be irrelevant players. But even with those low expectations I still was disappointed in the pick. The reason was that I never heard of him and he is a center. The importance of the center position has been devalued in recent years and to make matters worse, the Knicks had a glut of overpriced players at that position. When Robinson joined the team they had Enes Kanter, who they were forced to take back in the Carmelo Anthony trade and still had Joakim Noah on the roster.

After I started reading up on Robinson I actually got even more concerned. I thought to myself, oh man, this kid is a head case. This was a player that didn’t even go to college because he had issues qualifying. Subsequently, he did not play competitive basketball for a year. When I heard him speak at the introductory press conference he did not seem as articulate as Kevin Knox. I noticed that Scott Perry was trying to shield him from the media, it felt like he was hiding something. Even the team was setting the expectations for him really low, it was Westchester Knicks for the upcoming season. I thought to myself, this guy is going to be a 2-3 year project at best. What were Mills and Perry thinking?

Then I saw the first game of summer league and I understood why. Mitch’s talent jumped off the TV screen. His athletic ability and instincts compensated for his unrefined game. I said to myself, wait a minute, this guy is special, he might have the “It” factor.

It’s never mentioned, but one the reasons that the Knicks were comfortable trading Kristaps Porzingis(KP) was because they had Mitchell Robinson. The Knicks knew that KP would eventually need to be moved to the center  position once he filled out. They understood that a long term commitment to KP would result in them having to trade Mitch down the road. KP and his brother Janis noticed this as well. Robinson’s arrival changed KP’s status on the team, he was starting to lose some of his leverage. So when the Porzingis brothers made a power move and put the Knicks in a difficult position, you could see why the Knicks didn’t gravel or beg him to stay. KP went from untouchable franchise player to an asset that could be moved to address other needs on the roster. Knowing they had a special talent like Robinson made the Knicks more risk averse. Why invest $158M over 5 years on a player with injury concerns and an attitude problem when the big man you want anchoring your team is healthy and costs a lot less. 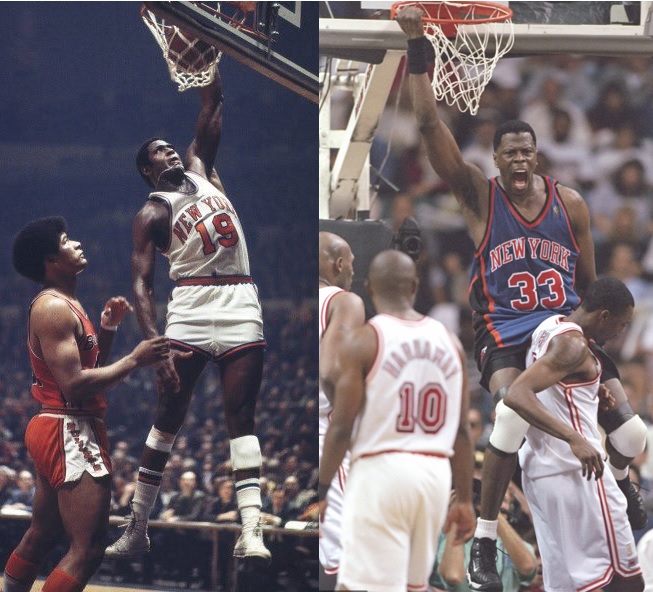 It’s a shame that KP’s time in New York was cut short by injury, he might still end up being one  of the great big men of the modern game. His skill set is perfect for today’s approach to offense. His coach in Dallas, Rick Carlisle, one of the most respected minds in the game has him focused on shooting more 3s to spread the court and has discouraged him from positing up. What value is there in being 7’3″ if all your going to do is stand outside the 3-point line? But that is where the game is heading.

When you look back at the history of the NBA, most of the great teams were anchored by a star center. The Knicks had two; Willis Reed and Patrick Ewing. However, the modern game has de-emphasized the importance of the position. The game is now run by multi-dimensional players as ‘positionless’ basketball is in vogue. Post play has become a taboo term. People will think your a fossil if you mention the term. The combination of the rule changes and the analytics movement have devalued the importance of the skill. There are a few centers that are good at posting up, but they must also shoot 3s and be nimble enough to cover the perimeter on switches to stay on the court. The lumbering big man that initiates offense from the post is an extinct species.

The new NBA cheat code to get around having a traditional center is to find what is known as a ‘rim runner’, a cool term for an athletic big man that can protect the rim, switch on defense and catch lobs near the rim. The concept of the rim runner started in Houston when they replaced their traditional center Dwight Howard with a slightly smaller but more athletic player in Clint Capela. It’s a lot easier to find a rim runner than an effective post-up center. This makes the position more interchangeable. Also, NBA teams are playing more small ball lineups, using a power forward to play center for stretches of the game. That phenomenon was started by Golden State, when they unleashed what they call their “Death Lineup” which features 6’7″  Draymond Green at center.

These trends make Robinson’s ascent to franchise building block even more remarkable as teams don’t build around rim runners. The ability he has shown has been so overwhelming that it has made up for his lack of offensive versatility. In an era when everyone is expected to shoot 3s, he has not attempted any. He doesn’t even have a mid-range shot or a basic post move, yet he is still a force on offense because he can literally catch a lob pass from anywhere within the area code of the basket. Then there’s his defense, aside from making players think twice about driving towards the basket, he has done something consistently that I have rarely ever seen. Mitch has an uncanny ability to block 3-point shots.

Thank God for Mitchell Robinson!! He has been one of the few bright spots in what has been two of the gloomiest seasons in franchise history. He has given Knick fans hope during these dark times. What also has to excite the Knicks is his focus and drive to succeed. That season away from competitive basketball that was viewed as a concern has actually been a blessing. Robinson appreciates and values the opportunity he has gotten and is determined to make the most of it.

This a player that knows he should have been a lottery pick if he hadn’t messed up. He fired his agent during his rookie season when he realized this. His agent made matters worse by not allowing him to workout for teams before the draft. Not playing competitive basketball for a year and not working out for teams before the draft resulted in him sliding into the 2nd round. All the articles published on the redrafting the 2018 class have him now going in the lottery. When he was in high school, their were many experts that had him rated higher than the eventual number #1 pick, DeAndre Ayton. If you were Robinson, wouldn’t that cross your mind everyday and motivate you to work harder?

As a life long Knicks fan I can feel myself get filled with excitement just writing about this kid. However, I just like most fans of this team have learned to temper my expectations. But you can not deny the special talent we see every night when we turn on a Knicks game. I have actually come to expect Robinson to reach into the clouds for a lob and throw down a monster dunk every night. On defense, I am no longer surprised when he blocks a shot from anywhere on the court, I am just surprised anyone dares to challenge him. I just shake my head and say what were they thinking, don’t they read the scouting reports?

My only concern with Robinson is that he stays in his role as a rim runner and doesn’t continue to expand his game. Last season, Robinson led all rookies in blocks (2.4) and FG percentage (69.4%) in 20.6 minutes per game. His 2.4 blocks ranked second in the NBA.

Tommy Beer wrote the following about Mitchell Robinson, “In the process, per Basketball-Reference, Robinson became just the sixth rookie since 1985 to average more than two blocks per game and shot over 52% from the floor. (Each of the other five were No. 1 overall picks: Hakeem Olajuwon, David Robinson, Shaquille O’Neal, Chris Webber and Tim Duncan). But Robinson made 69.47% of his field-goal attempts, which is an all-time record“. This season, Robinson leads the NBA in FG percentage (73.2%).

While Mitch has been extremely efficient at the rim we have been waiting from the much anticipated 3-point shot he had worked on in the offseason. Mitch himself said, “why work on something if your not going to use it in the game”. We also need Mitch to develop some sort of post move to make shorter defenders pay. Imagine if he came up with his own version of the ‘dream shake’? That and a short mid-range jumper to keep teams honest if they leave him alone is all he needs. The future looks a lot brighter with Mitch manning the middle. He is a young man blessed with tremendous talent and a desire to be great.

Ryan G. - November 12, 2017
0
According to Adrian Wojnarowski of ESPN, the New York Knicks are planning to waive Kuzminskas...