What is Knicks’ PTSD

In case you didn’t know, PTSD, is short for Post Traumatic Stress Disorder. It’s a mental health condition that’s triggered by a terrifying event — either experiencing it or witnessing it. Symptoms may include flashbacks, nightmares and severe anxiety, as well as uncontrollable thoughts about the event. If your a Knicks’ fan, PTSD tends to be triggered anytime the team is rumored to make a transaction. Every year, the trade deadline brings a level of stress that can trigger Knicks’ PTSD.

Now that the tradeline has passed, I and fellow Knick fans can breathe easy. While most fans get excited about the possibility of adding a new player to their squad, Knick fans have to worry about the team making a crazy deal. The fact is, Knick fans haven’t been able to trust their team. That would sound crazy if it hadn’t been proven true over and over.

You don’t hear the Miami Heat, Lakers, or Celtics linked to ridiculous trade rumors, only the Knicks. The reason is because the franchise has a long history of making bad moves.

I won’t torture you by revisiting any of them, but will say that it appears that those days are behind us. In this piece, I want to revisit some of the most talked about rumors this season that could have triggered our Knicks’ PTSD.

This player has been rumored to be coming to the Knicks for two straight seasons. While it made no sense since the Knicks have a nice young center in Mitchell Robinson. But where there is smoke their is fire. The front office could not be trusted to stay away for this player so much, that one of our writers, Fritz Alcindor Jr., felt compelled to dedicate an article to the subject, “Andre Drummond Would Be The Knicks’ Fools Gold”.

When the rumor started, the first thing I checked was who his agent was, had to make sure he wasn’t a CAA client. Then I checked his connection to the front office. Discovered that Scott Perry worked for Joe Dumars in Detroit when they drafted Drummond. I started seeing the connection points and said, oh this might happen. Luckily, it didn’t.

Now Drummond is taking the easy route and joining the Lakers to ride LeBron’s coat tails. A true star would have signed with a team that needed him more.

The next player on the list was Lonzo Ball. This potential acquisition at least made more sense. I got into a passionate exchange on Slack with the other writers and Mr. J Ellis since they are all in love with Lonzo. I wasn’t, and joked that he was Frank Ntilikina with a better p.r. agent, his dad Lavar Ball. Fritz, also wrote an article about Lonzo Ball, I begged him not to trigger my PTSD. He tried not to, but you can decide for yourself.

I was worried the Knicks were letting potential merch sales cloud their basketball judgement. I got especially worried once the news of the Bulls offer got out. To me, it made no sense to give up assets and then risk over paying for a player going into restricted free agency that is not a star.

Again. the Knicks didn’t fold under the pressure and are now in position to sign Lonzo in the offseason without losing assets. Another disaster averted. 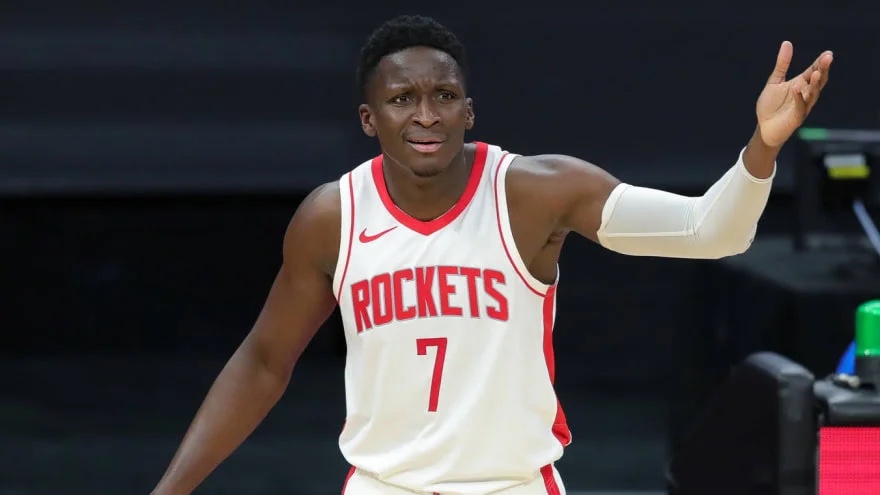 The last player linked to the Knicks I was worried about was Oladipo. Based on the fact that Oladipo had already rejected an extension offer from Houston, and that Miami was interested. I thought for sure the Knicks were going to offer the boat for Oladipo. Politically, it made perfect sense. Leon Rose use to be his agent and Scott Perry was in Orlando when they drafted him.

Acquiring Oladipo was the best way for Perry to save his job. It would also make Leon Rose look good, as he would get credit for leveraging his connections to get a star.

While Miami ended up getting Oladipo for nothing, signing him long term is still a risk. The Knicks are not in position to take that type of gamble. So while I don’t like that he landed in Miami, at least I won’t have to worry if he will regain his all star form, and live up to his contract like other past star signings. New York could have easily topped Miami’s offer, so the fact they didn’t tells me they definitely know something, Why else would they let him go to the Heat?

Even though the Knicks didn’t secure a big name, they actually made a trade. The 3 team trade with the Sixers and Thunder netted them two 2nd round picks: Philly’s 2021 and Miami’s 2024.

The Knicks continue to improve around the margins by getting draft capital for two players that weren’t part of the rotation. While I liked Iggy Brazdeikis and Austin Rivers, you could tell they didn’t have a future with the Knicks.

What was also surprising was that Coach Thibodeau complimented the front office for being disciplined and not making a move for the sake of making a move. Thibs sounds more like a Knick fan than a coach. Maybe he also has a little Knicks’ PTSD.