While Immanuel Quickley’s regular season debut was cut short because of a hip pointer injury he did not disappoint. Despite playing only 12 minutes, his plus/minus rating was +5, highest of any Knick. It was also better than Elfrid Payton’s,-15, who started. But before we get too excited, we need to remember a few things. The first is that the sample size is small, two preseason games and 12 minutes in a regular season game. The other thing is that Quickley didn’t play point guard at Kentucky. Even great college point guards have a hard time transitioning to the pros, so imagine a kid that didn’t play the position. With all that said there are plenty of reasons to be excited about Quickley. Let’s review them.

The first is that Quickley was pegged for stardom coming out of high school. Not only was he a 5-star recruit, he was a point guard ranked among the top 20 of his class. New teammate R.J. Barrett was the consensus #1 player of the class. So while he struggled in his first season at Kentucky no one should be surprised that the sophomore was drafted 25th overall.

Scouts are good at identifying potential stars based on the combination of body type, athletic ability and skill set. But the issue with this approach is that it tends to focus too much on potential over production.

If I told you there is a kid from Kentucky that was the SEC player of year that shot 43% from behind the arc on volume, 92% on free throws and is also a two-way player that will lock down the other team’s point guard.

What pick do think that player would be selected with? Exactly.

Somehow the Knicks got that player with the 25th pick. But many experts considered Quickley a reach because they had him pegged as a middle 2nd round pick. How is that possible?

Since he played off the ball at Kentucky the scouts viewed him as an undersized 3&D wing. They also downgraded him for his finishing around the rim which wasn’t good and attributed it to a lack of explosiveness. Bottom line is that Quickley didn’t fit into one their boxes. He wasn’t explosive enough to be a lead guard or tall enough to be a 3&D wing.

Pulling Quickley out of the box

You will notice that most of the great players that got drafted late in the 1st round or in the 2nd is due to profile checklists. Jimmy Butler was considered too old to be a raw prospect, 22 years old, so he was drafted 30th. Draymond Green was considered a tweener, not a good enough shooter to be a wing and too short to be a power forward, so he lasted until pick#35. Nikola Jokic’s body type and game were odd, there were no lumbering point centers in the NBA, so he lasted until pick #41. Not saying Quickley will end up being as good as these players, but the Knicks need to view him the same way.

Knicks’ offense needs gravity in order to take off

Instead of worrying about what Quickley isn’t, Knicks need to exploit what he is. Quickley is a smart tough-nosed player that is a lethal shooter. Coach Thibodeau, who isn’t one for giving out compliments said Quickley is one of the best shooters in the NBA. That is serious praise for a rookie.

Quickley provides something called “gravity“, an analytics term made popular by Steph Curry. In the NBA it’s not enough to be a good shooter, you need to be a feared shooter. A feared shooter forces defenses to pull towards him. When Quickley has had the ball behind the arc you’ve seen defenders scramble. Every time he has gotten ready to shoot most Knick fans are thinking that same thing, 43% from 3. That type of gravity has collapsed the defense and gotten other players open looks. Just check Kevin Knox’s stats when he has played with Quickley.

How to use Quickley

The reality is that the closest thing the Knicks have to a true point guard is Elfrid Payton, and no one views him as a long term solution. So if the Knicks don’t have a true point guard they can rely on then the best thing to do is play multiple ball handlers together. This isn’t uncommon in the NBA, as there really isn’t many true point guards. Russell Westbrook, Kyrie Irving, and, Steph Curry are “points” guards, lead guards in point guard bodies.

The Lock Down Backcourt

Would love to see Quickley paired with Frank and R.J. at small forward. This trio can share the ball handling duties. Plus, Quickley and Frank would provide incredible perimeter defense that would allow the Knicks to play Obi.

Playing Quickley and Rivers together provides the Knicks two smart ballhandlers that can get to the basket and hit outside shots. Defenses would have a hard time knowing who is running the point from play to play as they can switch on and off the ball.

The Save DSJ Lineup

Play Quickley with Dennis Smith Jr.(DSJ) along with Knox and Obi. Having those 3 players stretching the floor for DSJ along with either Mitch or Noel providing a lob threat (vertical gravity) is the best chance to get any production out of DSJ. 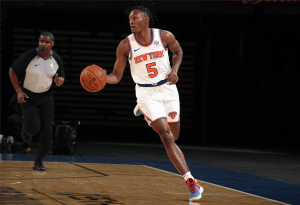 While Obi was the lottery pick, and the player with the higher upside, Quickley is the player that can have a bigger impact this season. He fits a need and has a skill set that makes the other players better. Frank, R.J., Knox, Mitch, and Obi would all  prefer to play with Quickley instead of Payton or DSJ. So let’s see what the rookie can do, if he can play the point, then the Knicks will have gotten the steal of the draft.

When will Mitchell Robinson shoot his shot?

Why Frank Ntilikina is a good draft pick for the Knicks

When will Mitchell Robinson shoot his shot?

Why Frank Ntilikina is a good draft pick for the Knicks