Much has been written and discussed on ways the Knicks can acquire one the brightest stars in the NBA from the Portland Trail Blazers. But it is not likely that the Knicks can pull off a trade for Damian Lillard. He is the franchise player in Portland and would only consider leaving to join a contender.

Building the Bridge to Championship

With that said, the Knicks should view next season as a “bridge year” and not go for broke. However, they do need to make significant moves just to return to the playoffs in 2021-22. The teams in the East are only getting better, so running it back with the same roster won’t cut it. The issue with the Knicks is that they don’t have enough top-end talent, that is what the Atlanta Hawks showed us in the first round series.

One step towards accomplishing that is by going after Lillard’s backcourt mate. While acquiring CJ McCollum may sound like a consolation prize, he is a significant upgrade over the current group of Knick guards. He hasn’t made an All-Star team or All-NBA team because he plays in the West and is the 2nd option to Lillard, but he has played well when Dame has been out.

McCollum is a star

In 33 career games McCollum has played without Lillard, he averaged 28.1 points, 6.2 assists, and 5.0 rebounds. While his shot volume increased to 23.5 attempts, he had a 45.8 FG%, 36% on 3-point shots. So McCollum is a player that can get buckets even when the defense is focused on stopping him.

Aside from that, McCollum has averaged over 21 ppg since he became a full-time starter in his 3rd year. This past season McCollum had an eFG% of 55.4, shot almost 51% on 2-pointers and 40.2% on 3-pointers. The only thing you wish McCollum did more was get to the free throw line. He averages less than 3 attempts per game, but did average 4.6 when he plays without Dame.

If McCollum is so good, why would Blazers trade him? It’s because they have to, in order to improve the team since they are short on assets. Also, McCollum and Dame are not a good fit defensively since CJ is an undersized shooting guard, only measuring in at 6’3″. It would make sense for the Blazers to trade CJ in order to get more frontcourt talent. If still makes sense to move CJ even if Lillard is traded, as they might as well do a full rebuild if that happens.

However, there isn’t a great market for CJs contract, it has 3 yrs/$100M remaining on it. That is where the Knicks come into play. They are one of the few teams that have the cap space to take on that contract and can pair him with a bigger guard in Barrett, thus allowing him to cover point guards on defense.

Lonzo Ball is 7 years younger, would cost less (~$20M per season), and you don’t have to give up players or draft picks to get him. While that sounds like a better option in theory, the reality is that Lonzo is not a good fit. Coach Thibodeau prefers point guards that can put pressure on the rim. Lonzo doesn’t do that, only 15% of his shots are within 3 feet from the rim, and only 20% are within 10 feet. He also only averages 1.2 free throws per game. If you watched any Pelicans’ games this season, you noticed that they ran the same offense as the Knicks. Zion Williamson was the point-forward, just like Julius Randle did for the Knicks. Lonzo played off the ball and was the secondary ballhandler. Any team that is going to give Lonzo $20M per season is taking a leap of faith and hoping he becomes a player he hasn’t shown he can be in 4 NBA seasons. For that, the Knicks might as well just resign Frank Ntilikina for the minimum, he at least gets to the line more than Lonzo.

What would McCollum cost?

The cost to acquire McCollum would depend on what happens with Lillard. If Dame decides to stay, then the Knicks would need to be part of a multi-team trade since Portland is looking to add a star. If Lillard is traded, then the Blazers would settle for prospects and draft picks. Below are two possible trade scenarios. 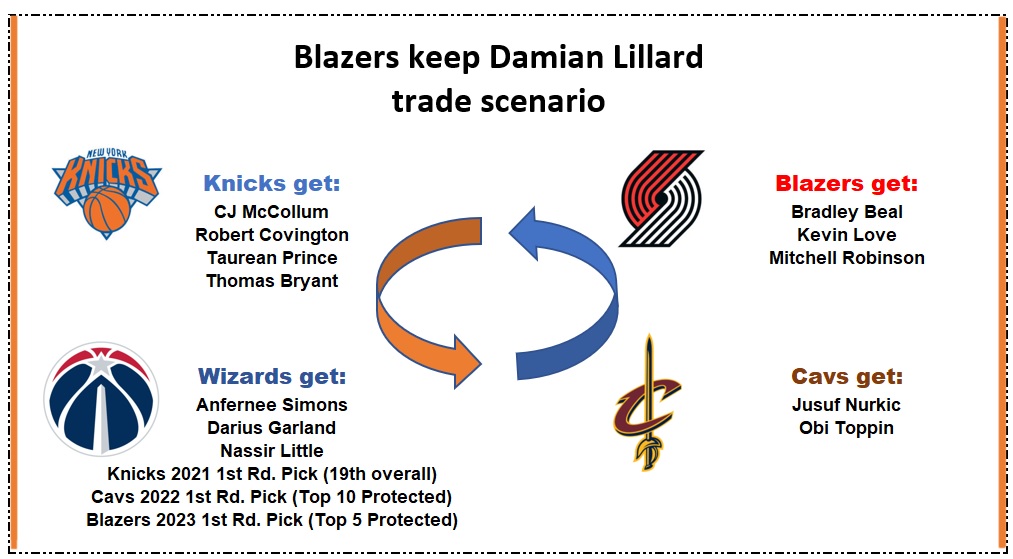 In the above scenario the Blazers go all-in and trade for Damian Lillard’s Olympic teammates: Bradley Beal and Kevin Love. In the 4 team trade the Wizards get 3 young players and three 1st round picks, and can get pick swaps as well. Cleveland gets to unload Kevin love’s contract. The Knicks end up giving up Mitchell Robinson, Obi Toppin and their 2021 #1 pick, 19th overall. Aside from McCollum, they get 3 veterans to plug into the rotation. The Knicks get keep Barrett, Quickley and their other two picks in this year’s draft, 21st & 32nd overall, which wouldn’t be likely in a trade for Lillard.

If Lillard gets traded to another team then the Knicks can help Portland fast track their rebuild. They can offer Portland Obi, Mitch, Knox and the Dallas 2021 1st round pick, 21st overall. The Knicks also get Robert Covington in the deal, a player that Thibs would love because of his defensive versatility.

While we love Obi and Mitch, the reality is that their value in the open market is low. Obi only averaged 4.1 ppg while playing 11 minutes a night. Mitch missed a lot of games because of injury and his contract is expiring. He looking to maximize every dollar he can get as he has never made more than $1.8M in a season. So the Knicks might rather get something for him now than lose him in free agency. As for Knox, he is still considered a project.

Knicks flip CJ for a Star

The only way the Knicks can significantly upgrade the roster is by taking on a big contract. The best asset they have is cap space and their isn’t a clear path to acquiring a superstar. McCollum is not the superstar the Knicks desperately want, but he is an upgrade. His contract isn’t attractive today, but will start to become more desirable after next season when it has 2 seasons left on it. At that point McCollum can be a player the Knicks flip if a superstar is made available on the market.

Ryan G. - November 22, 2018
0
Burke dropped 29 points to lead the Knicks to an unlikely 117-109 win over the Celtics. In a game where the Knicks needed extra firepower from someone, Burke provided it in all aspects.