We can’t start talking about how the Knicks have done without pointing to the most important stat, wins. The Vegas odds makers and many NBA experts said that this Knicks team would only win 22-23 games this season. They have already won 18 games, which is quit impressive. But what has been more impressive is how they’ve done it. They have played great defense and have shared the ball on offense. The effort given every night has been top notch, that is why they have upset so many teams.

While the main goal for this season was to set the foundation for sustained winning by focusing on player development. Winning is also important because you can’t expect players to buy into team culture if they don’t see results. While most fans would prefer the team play the young players a little more, coach Thibodeau has done a good job trying to strike a good balance between the urgency to win and player development.

That is why I am giving them a grade of B+. Let’s look at how the Knicks have performed in the first 36 games and what they need to accomplish in the 2nd half of the season.

The Knicks have gone back to their identity and are playing some of the best defense in the NBA. The Knicks are currently ranked 1st in points allowed at 104.4 points per game, and 2nd when adjusted for pace (per 100 possessions). Even with Mitch missing the last 9 games, the Knick defense has still been good.

While there has been some concern that their performance is not sustainable because opponents have missed a lot of open 3s. One needs to consider a couple of factors. First, who is shooting the open 3s and how hard are they working for the shots. When you watch the games, the open 3s the Knicks have given up are mostly to the role players. You rarely see a star player getting open shots. The Knicks are wearing teams out with their intense physical play. A lot of players are out of rhythm or don’t have their legs when they do get open shots.

The “C+” grade is an improvement over the 20 game report card, where I gave the Knicks a “D” grade. The reason is that their production has improved due to an infusion of talent. The addition of Derrick Rose has been a shot in arm for the offense. The team was too reliant on Elfrid Payton’s ability to penetrate and get to the rim. Now the Knicks have two players at the point guard position that can do that.

Rose has also helped unlock the offense as he is a better passer and shooter than Elf. Defenses also respect Rose more than Elf, so he provides more gravity.

For the Knicks’ offense to improve, the fast break points need to increase, currently ranked last in the NBA. Generating easy baskets is vital when your not a great 3-point shooting team.

At the 20 game report we talked about Randle’s transformation from salary dump to all-star. All Julius has done in the next 16 games is get better. He has started to cut down his turnovers and has improved his outside shooting. Randle is currently shooting 41.2% from beyond the arc. He is also averaging 10.9 rebounds and 5.5 assists to go along with his 23.1 ppg. The last big man to provide the Knicks that type of production was Patrick Ewing. 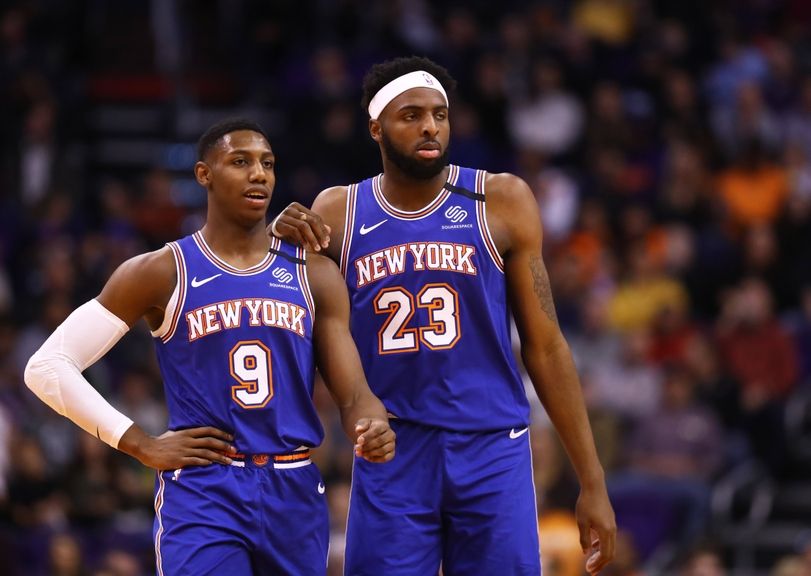 As for the two young core players: R.J. Barrett and Mitchell Robinson, the results have still been mixed. They have been great on defense, but offense is still concerning. Thibs hasn’t done R.J. any favors by playing him with Elf. Many fans think R.J. should focus on improving his outside shot so he can play with Elf. While that is important, what the Knicks should do is let him work on what he does best, get to the basket. Let R.J. master that by surrounding him with shooters that space the floor. Let Barrett get great at his core skills before asking him to expand his game.

As for Robinson, his defense has improved, but his offense hasn’t. Mitch only played 7 more games since our last report and nothing changed. What has frustrated me about the situation is that Robinson will miss 4-6 weeks. The Knicks had 27 games where they could have run 1 or 2 plays per game for Mitch. By the time he gets back, the pressure to win will only increase, so the likelihood of him getting opportunities on offense will only decrease.

At the 20 game mark it looked like Kevin Knox had turned the corner and was going to be vying for more minutes. Unfortunately, the opposite has happened. This is where we need to trust the coach, and assume Thibs has good reason to stick with Bullock over investing in Knox’s upside.

Regardless, Knox is key to the Knicks’ long term success. Hopefully he will improve in the 2nd half of the season.

Obi and IQ have only looked better since the 20 game report. Quickley is already the talk of the league. As mentioned earlier the eye test says Obi is a player. Unfortunately, he has been a victim of Randle’s success. While you have folks in the media like Marc Berman who are looking to stir up controversy by saying that Haliburton is better than Toppin; that Obi has been a disappointed. That simply isn’t true.

The only reason the Knicks didn’t score an A+ is because Thibs hasn’t played Obi more. And when he does, he uses him incorrectly. He is shooting way too many 3s. He needs to be used more on the short roll or on the block posting up. While he is only shooting 29.5% on 3s, he is shooting 60.7% on 2s, for an effective shooting percentage (eFG%) of almost 54%. In the 2nd half Obi needs to average more than 4 shots per game, and have 3s account for less than 40% of his shots.

As for Quickley, he is shooting almost 40% from behind the arc and 94% from the free throw line. He is by far the steal of the draft. The only disappointment surrounding IQ is that he wasn’t selected for the Rising Stars Challenge, instead the NBA chose Tyrese Haliburton.

The team has been better when Alec Burks plays, he is shooting over 40% on 3s and provides some versatility on offense due to his size and ballhandling. Burks has been a major upgrade over Damyean Dotson. Nerlens Noel averages 2.0 blocks per game and has been solid as the starting Center since Mitch got hurt.

Then there is Derrick Rose who was acquired for Dennis Smith Jr. and a late 2nd round pick. The team has looked vastly better in the 10 games he has played in. D-Rose looks reinvigorated since returning to New York. It feels like he is appreciating his 2nd chance with the Knicks. Having a point guard that is in sync the coach is invaluable. It has helped get the other players acclimated to Thibs.

As the Knicks get ready for the 2nd half of the season you would like to see two things from them. The first is to continue winning. The second is to play their young players more.

All these trade talks for stars won’t happen if the Knicks don’t have enough assets. That means that the Knicks will need to play Frank Ntilikina, Kevin Knox, and Obi Toppin more if they want to increase their trade value.

They also need to move on from Elf, as we have mentioned before, he doesn’t fit. Just look at how well R.J. has played since Elf has been on the shelf with a hamstring injury. Sorry, couldn’t help myself. Thibs needs to go with D-Rose and IQ at the point guard position and mix in Frank if he wants to make the playoffs. Lastly, Thibs needs to think big picture, and trust his other players. We can’t expect Julius to have any gas left in the tank for the stretch run if he continues to be among the league leaders in minutes played.