State of the Knicks

After the debacle in Milwaukee there is no way to sugar coat the direction this season has taken. The Knicks hit rock bottom Monday night as the losing streak was extended to seven games. The loss was the 6th worst in team history in terms of margin. It was the worst since the 50 point loss to the Mavericks on January 24th, 2010. While it was only one loss, it felt like more since it was by almost the same number of points as the total for the prior 4 losses (45 points). It was absolutely painful to watch but it did shine a bright light on what is wrong with this team. The chemistry is bad, which is somewhat expected with so many new players. The offensive scheme is rudimentary at best, this is surprising when you consider all the veterans on this team. Defensive effort has been disappointing, that points to a lack of focus. Lastly, the attitude of the team has been soft. They don’t play to win, but rather not to loss. Most of these issues fall mainly on the coach and some on the veteran players. What is not an issue is the talent. It is clear to anyone the has watched this team, that this is a more talented roster than last season’s team. While things are bad, there is no way this team will not win more than 17 games this season, so let’s not entertain that thought just because the record is worst through the first 21 games. The only good thing about hitting rock bottom is that it can’t get any worse. Sometimes when things are falling apart, they may actually be falling into place.

The biggest issue a team with so many new players has to overcome is chemistry, it’s hard to judge how good a team is until they have had time to develop it. But chemistry should be turning into less of a concern after 20 games. The larger issue was been the inconsistent roles Fizdale has placed the players in.

Fizdale has given too much of the playmaking responsibilities to Randle and Morris. He tried to make Randle a point forward, a role he was never played in his career. Randle is at his best when he is on the block posting up. He is not effective playing at the top of the key. While I respect Fizdale’s openness to experiment, the reality is that this is something that you try on occasion later in the season after chemistry and roles have been established. Then there is Marcus Morris, let’s just say it, he is not a number 1 option. There is a reason why he has never averaged more than 13 points in a season. While his 3-point shooting has been a bright spot, his scoring near the basket has been atrocious. Again, why have him clogging up the paint for Randle if he can’t score from that area of the court. Leave Morris on the perimeter since he is one of the best 3-point shooter in the NBA this season. This would stretch the court not only for Randle, but also Smith Jr. and Barrett, your 3 best players at creating offense near the rim.

It was put on full display how important it is to have a good offensive scheme. Excluding Giannis Antetokounmpo, the talent on both rosters is comparable. Middleton and Bledsoe are on par with the Knicks’ top 2 players. The same goes for the Bucks role players. The difference is that they run a more sophisticated offense with more ball movement that puts their players in better positions to score. How good would the Bucks be if they ran an iso heavy offense like the Knicks?

Staying on the topic isolation offense. Fizdale seems to have too much faith in some of his players. It is one thing to let LeBron James, Dwyane Wade or Mike Conley Jr. go one-on-one to create offense versus letting anyone on the Knicks do it. The team is at its best when the ball is moving to create open shots and mismatches. The Knicks rank last in the NBA in assists per game at 19.6, while the league average is 24. The Bucks average 25.6 assists per game, that is 6 than the Knicks.

Conversely, the team is actually good at shooting 3-pointers, 9th in the NBA in shooting percentage(36.3%), but only 25th in attempts. The most valuable shot on the floor is the corner 3, Knicks are ranked 23rd in 3 pointers attempted from the corners despite being tied for 6th in percentage made.  The Knicks rank 8th in 2-pointers attempted, they have attempted the 3rd most shots from 16 feet to the inside the 3 point arc, the worst shot in basketball. As a result, the Knicks ranked last in the NBA in 2-point shooting percentage. When you look at the last 10 opponents, almost 43% of their shots were 3-pointers, while the Knicks settled for long 2-pointers.

Effort is another category that is hard to quantify, especially if the team doesn’t have many great defenders. The two metrics to focus on is turnovers generated and 3-pt shooting percentage allowed. The team is middle of the pack in turnovers generated at 15.2 per game which offsets their turnovers on offense, but that number needs to be higher in order to make up for their 3-point defense. The Knicks’ opponents rank 3rd in 3s made per game at 13.1 and 3rd in 3-pt FG% at 37.8%. The team is also only average at guarding 2-pointers as they rank 14th in 2-pt FG%. Fizdale says their main priority is protecting the paint but they are not doing it well enough to compensate for their 3-pt defense.

Fizdale loves to talk about being tough and having no fear, but that attitude is not what is reflected on the court. Case in point, the free throw shooting has been horrible. Guys look like they are playing in Game 7 of the NBA Finals when they get to the line. The Knicks are ranked last in free throw percentage at 67.4%. The team would score 2.4 more points per game just by reaching the league average of 76.7%.

Charles Oakley laughed when someone was comparing the Knicks new big men to the 90’s Knicks teams. After watching the first 21 games, he is right. Knicks rank first in personal fouls at 24.1 per game, but they are mostly soft ones. If the team is going to play big, they need to make teams pay for coming in the paint, especially at the Garden where everyone wants to shine. Randle, Morris, Portis and Gibson should strike fear in the eyes of their opponents. If the Knicks are going to lead the NBA in fouls, then they need to make them worthwhile. 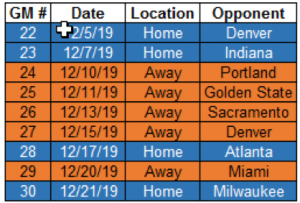 Since the Milwaukee game is in the books, we will look for the next 9 games. There are only 4 games versus teams with losing records with Portland being one of them. Also there are 2 back-to-back games, at Portland then at Golden State and then at Miami followed by Milwaukee at home. The last 10 game stretch included only one back-to-back and those two games were at home. While the outlook looks bleak, all of their upcoming opponents with the exception of Milwaukee are ranked 12th or lower in 3-pt shots attempted. At least these teams are not likely to exploit the Knicks greatest deficiency.

As for the approach going forward. The team needs to only play the guys are going to give full effort on defense. They also need more production from the point guard position, the ball needs to be in their hands more in a motion heavy offense, need less iso play from the Bigs that lead to long 2-pt shots. The team needs to consider playing Barrett more at small forward so they can have 3 ball handlers on the court that can; push the tempo, minimize turnovers and can defend the 3-pt line. Lastly, keeping things in perspective, we were hoping the Knicks would win 30+ games this season, it is not the end of the world if they finish with 20+ wins as long as they develop the young players.

Watch the latest episode of our weekly podcast  The Knick of Time Show. Video below