A growing theme in New York Knicks fandom was the revival of a once ancient term, one none of us expected to hear for another thousand years. Tales of an ancient device that spun at the speed of light laying waste to the grounds around it, whipping up the dust and ash in its wake.

A single rip of a plastic tab, and this contraption can wreak havoc on entire civilizations. They call it: The Beyblade.

Julius Randle, once a younger, more confused player in this league, was dubbed “The Human Beyblade” because his style of play once echoed the folklore of the device in question. Spin move after spin move, Randle would throw possessions away, eating tragically into the Knicks’ chances of winning games on a consistent basis.

Why YOUR team should trade for Julius Randle:

But that is ancient history. Since the Great Thibolution, things have achieved a sense of balance; of order.

The Knicks stand at .500 at the time of writing, heading into their last game before the All-Star break against the Detroit Pistons, giving them a chance to get back over the hump and mount a playoff push.

That said, there is something of note to consider now that the Knicks are where they are: to extend or not to extend?

Randle is currently in the second year of his three-year deal with the Knicks, has earned a $945K incentive for becoming an All-Star, and has only a partial guarantee for next season — one I expect gets fully guaranteed after the year he’s having.

Nonetheless, Randle is set to be an unrestricted free agent in 2022, but quite honestly, it would be a mistake to let him walk. There are always pros and cons to every business decision, so we’ll be going through those to assess whether or not he’s worth it. 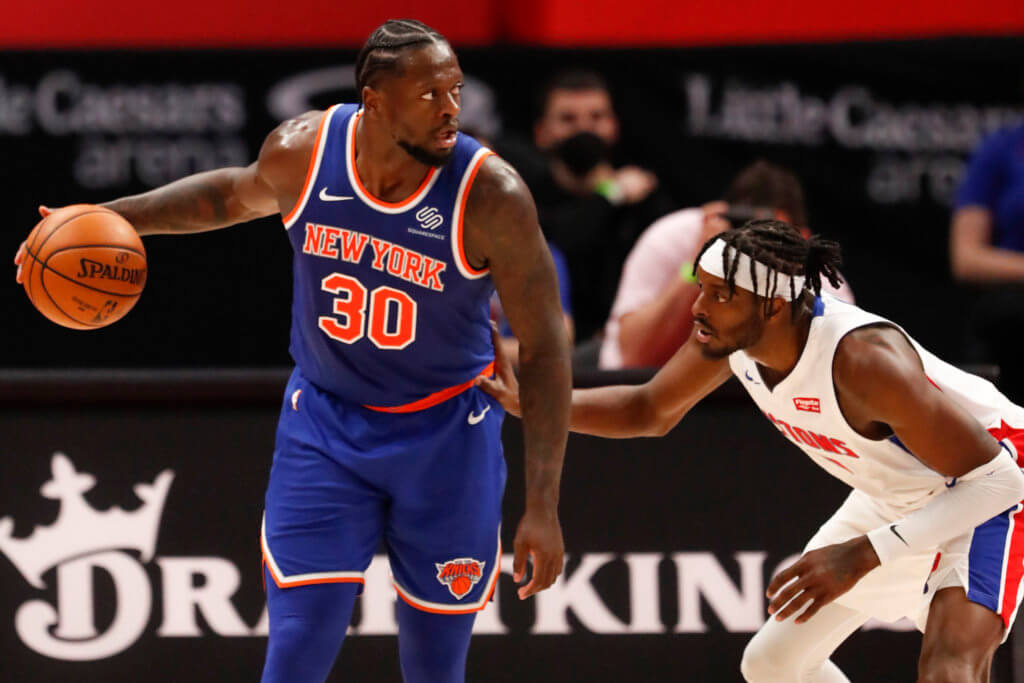 If you’re of the mentality Randle should be extended, no doubt there are a lot of examples you could come up with to keep Randle around.

For starters, the sheer evolution he made from being a walking tornado has made enough of a case to keep Randle around for the long haul. He’s shown he can adapt to new circumstances — under the right guidance of course, a.k.a, not David Fizdale. As a starter under Tom Thibodeau, Randle is first in minutes played among NBA power forwards, 5th in PER, 3rd in points per game, 7th in 3PT%, and so on and so on.

His metrics have improved across the board from last season, one full of doubt and deception from his previous roles in the league.

To reference his Beyblade days again, Randle had a tendency of not passing the ball out double and even triple teams, and if he did, he’d get the ball to his teammates late. It made the team sloppy, and generally brought down the production.

Last season, Randle ranked in the 90th percentile for power forwards in AST% at 15.9%, meaning he assisted on that percentage of made shots from his teammates (courtesy of Cleaning the Glass). This season, he ranks in the 96th percentile, assisting on 25.1% of his team’s shots, a stark spike in effort to create more ball movement.

To dive even further, Randle was in the measly 54th percentile for AST:usg, a metric that determines how often the player got an assist based on usage, at 0.58. This season, Randle has jumped up to the 87th percentile at 0.89.

But he didn’t stop there.

One of the weakest facets of Randle’s game was his ability to shoot from 3PT, which was pretty detrimental given the lack of spacing the entire team had around him. Randle was a gross 28.6% from 3PT last year, good for 25th percentile for power forwards. This season, Randle ranks in the 83th percentile, averaging 41.2% from 3PT. He essentially evolved into a stretch-four over the course of the pandemic which is, to say the least, the most astonishing transformation we may have seen from him thus far.

To top things off, Randle has improved his free-throw percentage from 73.1% to 80.8% this season, a career high.

In fact, he’s averaging career highs in every major category at this point of the season, with the exception of FG% — which makes sense given his knack for shooting from deep now.

He’s shed the skin of his former self, a player lost in the veil of higher expectations, and become a coachable athlete willing to do whatever it takes to make his team better. He is a beacon for this current Knicks team, and he shows it every day.

I mean, you don’t get a 44-point game with New York and not get extended right?!

Extension?! You must be mad!

If you’re of the mentality that Randle should not be extended, then I’m genuinely curious where your mind is at.

There are few cons I can come up with pertaining to a Randle extension. The dude has taken a carcass of a franchise and revitalized it after being berated by numerous fans last season for his fumbles and missteps.

Perhaps the only cons to a Randle extension are:

Of the three negatives I listed, about two of them are rational concerns to have regarding the extension of any player a franchise can sign a contract with, and they’re too hypothetical to have any real concern with. This isn’t the Kristaps Porzingis debacle, this is a franchise player in his prime being worth every penny he’s offered for willing the Knicks to relevance.

Simply put, not extending Randle is a con in and of itself. The Knicks can afford a whole lot, especially signing Randle to as much money as needed to keep him around. He’s facing the uphill battle of making the Knicks good again and taking it well. The better he becomes, the more players want to play in New York again, and the more likely the Knicks are to succeed.

Randle has shown a tenacity we’ve not seen since Carmelo Anthony. Say what you will about Melo, he stuck around through some of the worst seasons in franchise history because he wanted to be here.

We have that again in Randle, but he’s made strides to turn this team around on top of that.

If you haven’t yet, I strongly recommend his Player’s Tribune post, as you’ll get a look into his head as part of the Knicks organization, i.e., internal battles, personal anecdotes, decisions he had to make.

He certainly made one thing clear: “I’m damn proud to be a Knick.”