While we all want to see the team win more games, the main goal of this season is to develop of the young players. That is why I decided to write a series of articles on the young core. One, it distracts us from the product on the court and second it provides us optimism for the future.

The reason I decided to start with Kevin Knox is because of something that resonated with me after the Knicks didn’t win the 2019 lottery and the right to draft Zion Williamson. Like many fans of the team, whenever I am thoroughly disappointed I turn to ESPN’s First Take show to ensure I have hit rock bottom. As I was watching them talk about the Knicks’ misfortune, Stephen A. Smith said something that struck a cord. He said “how great it would have been to have had a Skywalker in the Garden”. I thought that was an odd thing to say, especially since that is not Zion’s nickname. Then as someone that knows the history of this team it hit me. Stephen A., who is a lifelong Knicks’ fan was recalling another major disappointment in the team’s history. The ironic thing was that I actually had also subconsciously thought of the Skywalker reference almost a year earlier.

When draft night was approaching on June 21, 2018 the experts started mentioning Kevin Knox as the most likely player to be selected by the Knicks with the 9th pick. The early mock drafts had him going to the Clippers or the Nuggets at the end of the lottery. It appeared that the Knicks’ need at small forward coupled with an impressive workout raised his stock. I personally cringed at the thought, not because I thought he was a bad player, I really didn’t know much about him. It was a simple and lazy knee jerk reaction. I said, oh no, not another raw 6’8” athletic forward from Kentucky. Not another fake Skywalker.

Many Knicks fans that are reading this story are probably not old enough to remember Kenny Walker. He was the 5th player selected in the 1986 draft by the Knicks. This is significant because he was the highest draft pick in the Patrick Ewing era. Like Knox, he was an athletic forward from Kentucky. However, he was labeled a can’t miss prospect and the heir to Bernard King’s throne. He was going to be the next great wing player in the league. Chicago had a kid with the nickname ‘Air’ Jordan and New York now had one with a better nickname, ‘Sky’ Walker. The Knicks appeared to have laid the ground work for a winner. A young player of Walker’s caliber paired with Patrick Ewing sounded formidable. The sky actually appeared to be the limit.

Unfortunately Kenny Walker ended up being a bust. The highlight of his career was winning the NBA slam dunk competition in 1989. But what people don’t realize is the effect his selection had on the course of NBA history. Aside from pushing Bernard King out the door after recovering from what was considered a career ending knee injury, they made a trade that changed the course of NBA history.

Out of all the bad trades the Knicks have made, this is one they wish would remain buried in the league’s transaction logs. At the beginning of Walker’s rookie season the team traded their 1st round pick in the next draft (1987) to the Seattle SuperSonics for an average point guard, Gerald Henderson and Seattle’s 1st round pick. Seattle made the playoffs and ended up with the 18th pick, which now belonged to the Knicks. New York won only 23 games and ended up with the 5th pick for the second year in a row. What happened next is considered one of the worst draft day trades of all time. Seattle traded the Knicks’ pick to Chicago in a package for the rights to the 8th pick. Seattle essentially traded Scottie Pippen for Olden Polynice. While Seattle gets ripped for making the trade with Chicago, the Knicks were complicit. No one talks about it because you would need to connect the dots which the media never has time for. Also, with the 18th pick the Knicks drafted the eventual rookie of the year , Mark Jackson.

We can’t assume the Knicks would have picked Scottie Pippen , especially with Walker on the roster, but the opportunity was their’s. Imagine how Knicks’ history would have changed if Pippen had played with Ewing instead of Jordan. They always said that the only player that could defend Jordan was on his team, which made him even more unstoppable.

Back to the future

Kevin Knox was brought in essentially to be the replacement for Carmelo Anthony, just a year later. Similar to Walker, he was replacing a future hall of fame small forward. While it’s still early in his career, it’s evident that he will be a better player than Walker. Knox has already shown he is going to be at the very least a reliable outside shooter. The question is if he can harness his immense athletic ability to become a great scorer and solid defender.

Behind every successful person there is usually a great support group. Usually family members or someone with experience in that field. Fortunately for Kevin Knox he has both.

Who knows what motivates Kevin Knox to keep pushing especially when things are not going his way. What we do know is that he isn’t intimated by the big stage, that might be  because of his upbringing. His father, Kevin Knox Sr. was a star football player at Florida State in the 1990’s. Despite playing for one of the greatest programs in college football, his pro career was underwhelming, only playing a couple of seasons in Canada.

Seeing how successful his father was, but still feeling unfilled could have an impact on a son that has his father’s name. Maybe it’s the fear of his career ending up similar to his father’s? Or it could be love that drives his desire, making his father proud by reaching heights in athletics that his Kevin Knox Sr. fell short of. 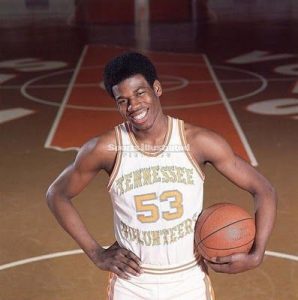 There are few Knicks’ legends who’s name still resonates with today’s players. Even less that grew up in New York City with blue and orange running threw their veins. That man is Bernard King, one of the most prolific scorers in NBA history. The Knicks have asked him to take on the role of mentor for Kevin Knox.

King’s role is to explain the mental part of the game to Knox. Sharing with him how he prepared for games and how he developed the mindset necessary to thrive in the competitive NBA ecosystem. Knox can actually learn more from King’s personal struggles and the adversity he had to overcome than his successes. The best gift King could provide Knox is his relentless drive to succeed.

When Knox was drafted he chose a number he had never worn before, #20. This number holds a special place in the hearts of Knicks’ fans. It used to be worn by current G-League GM Allan Houston. He is best known for being one of the stars on the last Knicks team to make it to the NBA finals. Knox did this on purpose, as he wanted the challenge of living up to Houston’s legacy. Like Houston, he is a wing player from an SEC school. Don’t think Houston isn’t flattered by the gesture. Allan Houston’s game had a lot of similarities to Knox’s. Both are great outside shooters that are athletic and can get to the rim. Houston is a great role model as he is a mild manner guy who’s career in New York didn’t take off right away. He also is a great example of how New York embraces it’s heroes. Despite starting his career in Detroit, he will always be considered a Knick.

The making of Kevin Knox II

While Knox’s career hasn’t gotten off to the same start as some of the players in his draft class, it’s far too early to reach a conclusion. There are factors that need to be considered first. Knox was the 2nd youngest player taken in the 1st round, most of the players drafted before him are at least a year older than him, he was only 18 years old on draft night. Also, he grew up training to be a football player like his dad. He was the starting quarterback for a Tampa area high school football powerhouse. He only switched his focus exclusively to basketball after he grew to 6’7″ and realized he was going to be too tall to play football. It’s quite remarkable that after making that realization he quickly became the 7th best prospect in his high school class, got a scholarship to Kentucky and then became a lottery pick by the age of 18.

While most NBA basketball players dedicated themselves to the sport at an earlier age and were even held back a year in school in order to be more physically developed than the other players in their class. The path Knox chose put him at a disadvantage, so his success is even more remarkable.

Another factor most people fail to realize is that Knox has brought up with a football players mentality. He was taught by his father to embrace contact and physical play, not to shy away from it. This mentality is necessary when trying to score at the rim. What differentiates players that are good at finishing near the rim is their willingness to absorb contact when driving to the basket. While we have only seen glimpses of it, the ability is there. Just check out the video clip below.

When Knox was drafted with the 9th pick, it was understood that the Knicks were taking the long view with Knox and were going to be patient. They knew he was raw and was going to be a bit of a project. When you review the careers of the great wing players in the NBA, you notice similar trends. Most of these players didn’t develop until they were at least 21 years old. They also played with a better surrounding cast, so they weren’t the main focus of the opponent. The question is how good will he be.

Below is a comparison of Knox’s first 2 seasons in the NBA versus other prominent wing players. As you can see, there are not many players that were successful at such a young age. His scoring average is only second to Klay Thompson who was a year older when he entered the NBA. You will also notice that Knox has the 3rd best 3-point shooting % in the group behind two Warriors, Thompson and Barnes. I am sure Knox’s 3-point shooting % would have been higher if he played with the same supporting cast Barnes had.

Unlike Kenny Walker, Knox has a better support system. While Bernard King saw Walker as the player that was ending his career with the Knicks, Knox represents a new hope. King sees Knox as the player that can carry on his legacy and fulfill the dreams his knee injury robbed him of. The same could be said to some extent about his father and even Allan Houston. For as accomplished as all these men are, there are still heights they could not reach. Maybe they can live vicariously through Knox and he can become a vital piece of the next great era in Knicks’ history.

Andre Drummond Would Be The Knick’s Fools Gold