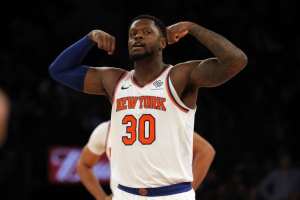 It is now the year 2021, and our beloved New York Knicks have finally reached a status of “watchable,” and a good amount of credit has to go to one Julius Randle, an emerging star power forward, having a breakout year. If you must, feel free to read that sentence again. Last year, Knicks fans would have laughed at that statement. We all saw Randle last season neglect his teammates, sprint down the middle of the lane into a triple team while doing a spin move, inevitably resulting in a miss, a blocked shot, or a turnover. His numbers, though solid, were misleading, as he seemed to rely on himself more than his teammates. So what is so different this year? Is Randle truly an all-star caliber player this season? Let’s examine the evidence.

The easy way to track Randle’s improvement is on paper, as he has doubled his assist averages from last year, averaging six a game, which currently is the highest in the league amongst front court players. In fact across the board, Randle’s stats have improved tremendously. Most notably, he’s become a more efficient three point shooter, and is currently averaging over 80% from the free throw line for the first time in his career. The statistical rise has culminated in Randle improving his PER by three points, currently one of seven power forwards in the league with a PER over 20 (his current ranking, at 7th, is four spots ahead of former Knick, Kristaps Porzingis for those keeping track). Randle has only ever achieved that rating once before, as a side-kick to Anthony Davis when the two played for the Pelicans.

So what has lead to this statistical jump? There are some answers that the casual fan may throw out there. It could be as simple as the drafting of Obi Toppin. After all, the former college player of the year from Dayton plays the same position as Randle. Rumor has it this was a motivating factor for Randle. He possibly started the season with a chip on his shoulder because of this selection, knowing that his starting spot, and more importantly his Knicks tenure, could be in jeopardy. Additionally, Randle could be a free agent since the last year of his contract is not fully guaranteed. Knicks would only owe him $4M if they decided to release him. So a monster year would not only insure his salary for next season, it will also give him the ability to “secure the bag” with a contract extension. However, if you’ve watched every game this year, you’ll notice the fire and intensity Randle has been playing with, portraying himself as a captain who wants to win, rather then someone hell bent becoming an all-star (Let’s call this, the Kanter Effect for fun).

Perhaps the most noticeable change thus far is his willingness to trust in his teammates and become a better leader. He’s made it a point to take the rookies, specifically Toppin, under his wing. He came to training camp in the best shape of his career, something the Knicks were incredibly enthusiastic about. The chemistry between himself and R.J. Barrett has tremendously improved, giving the Knicks an offensive one-two punch they had been lacking for years. Coach Tom Thibodeau has seen Randle’s improvements first hand. “[He’s] playing big minutes, comes in the next day and works, takes care of his body, great with recovery, great with film sessions, and it’s the type of leadership that’s invaluable to a team,” Thibs said.

So can we answer the question? Is Julius Randle indeed an all star? He is a major factor for why the Knicks are currently contending for a playoff spot, so a selection may indeed come true. There are also countless times in years past where a deserving player gets snubbed for a more popular one, and there are a decent amount of front court payers that may get the nod over Randle; Bam Adebayo, Jayson Tatum, Jimmy Buter and Domantas Sabonis to name a few. However, given the evidence, Knicks fans surely believe that Randle deserves the opportunity. As one NBA scout put it to SNY’s Ian Begley, “The East is crowded, but he looks like an All-Star.”