The Knicks have played less than 10 games this season and everyone is already bailing on the season. The concern is not the overall talent on the roster, it’s the production from the point guard position and the inconsistent rotations. Having too much talent is a good problem to have, but not knowing what to do with it is a bad one. This team is starting to remind me of the Isiah Thomas Knick teams of the early 2000s. When you look back there was plenty of talent on those rosters: Zach Randolph, Jamal Crawford, David Lee, Matt Barnes, Trevor Ariza, etc… But there was no quality point guard play or cohesive plan. Many of Thomas’s guys went on to be all-stars or key rotation players on championship teams. However, that collection of talent never produced more than 33 wins in a season for those reasons. This season can’t be wasted by going done the same path.

The first thing the Knicks need to do is decide on their identity so they can settle on lineups and limit the regular rotation to 9 players. The point guard play hasn’t been good but can improve to a level were it’s not costing the team games. The identity of this team reflects the culture. Mills, Perry and Fizdale have always stressed ball movement, hustle and good defense. To the Knicks credit the players that they have brought in have played hard and have set a good example for the young guys. The main issue is the lineups and roles Fizdale has been experimenting with. 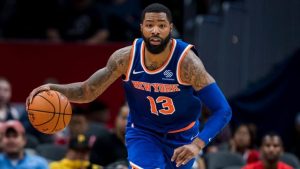 The Knicks need to identify who are their core players and commit to an offensive philosophy that works for them. Aside of Julius Randle, none of the other vets on this team are great scorers. Marcus Morris has never averaged more the 14 ppg in a season. Wayne Ellington is a career 38% from 3-point range and has never averaged more than 11 ppg in a season. There is no reason to feature them in the offense or in any lineup. The team needs to focus on the core players that are going to be on team going into the 2021-22 season. The 30+ year old vets are not going to be on this team by then, they will be; Taj Gibbon (36), Wayne Ellington (34) and Marcus Morris (32).

Below is the hierarchy of players that should be prioritized. 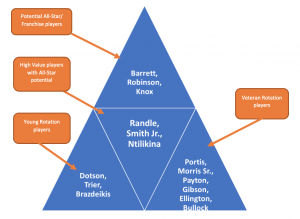 The players on the top of the pyramid are Barrett, Robinson and Knox. They have the potential to be franchise players in a couple of years. The level right below are your young high value players; they are Randle, Smith Jr. and Ntilikina. Their ceiling is not as high, but they can be very effective. While Randle is a vet, he is still only 24 years old, he might not be a franchise player, but he can be an all-star. Also, his Knick career will be viewed as a point of reference for how this organization handles big time free agents. Knicks need to ensure he succeeds if they want to have any chance of attracting better players in the summer of 2021. The bottom two groups on the pyramid are the role players. They are young guys on cheap contracts and the veterans at higher salaries. Players in these groups need to be slotted into lineups and roles that support the development of the core six players. Their playing time and touches are not a priority. People might say that giving more playing time to the young players is a form of tanking which is not good for culture. But what is the ceiling for a starting lineup with Payton, Ellington, Morris and Portis? What, 35 wins tops? Lineups and rotations focused on the young core will win close to 30 games. Fizdale’s job security is not going to improve by sacrificing development for 4 or 5 more wins on a none playoff team. Below are lineups I think Knicks should go with for the rest of the season. I see the Knicks playing only two point guards, with Frank being the back-up. One disclaimer, these lineups assume that Dennis Smith Jr. is right physically and emotionally. If he is not, then Payton replaces him as the penetrating point guard in these lineups.

I know this lineup looks odd and yes, I am on team Frank, but let me explain. I don’t care what promises were made to Marcus Morris or any of the other vets, they all got paid over market value to join this team. Also, it’s not as important who starts the games as much as who closes them. I only see this lineup playing 10-12 minutes a game, but it will help the team get off to good starts. The reasons I like it are defense, floor spacing and pace. On defense, you got Mitch patrolling the paint and Frank securing the perimeter. They allow Randle, RJ and DSJ to focus on what they do best, which is score. The floor space isn’t great in the half court if Frank isn’t hitting open jumpers, but the defense will create lots of transition opportunities. If you ask an opponent what they don’t want the Knicks to do, it’s simple. It is having DSJ and RJ attacking the rim, Randle pounding on their Bigs in the paint, Mitch protecting the rim and Frank locking down their best wing player. The opportunities to run increase when you have four players that can start a break and Mitch, who can outrun most centers. The transition offense will also lead to open 3s for Frank and Julius when they are trailing on the break. Having DSJ and RJ playing downhill will lead to easier opportunities for Randle. This unit also fits with Fizdale’s philosophy of always putting pressure on the defense by pushing the ball on rebounds and drawing fouls on drives. Having three ball handlers on the floor will also help reduce turnovers as you are not relying on Randle to handle the ball in order to create offense.

This lineup is lethal as a second unit. DSJ would love it, allows him to be primary ball handler versus other team’s backups, gives him floor spacing by having four shooters on the floor. As for Knox, having a point guard that can break down a defense will help him get more open looks. Also, you surround Kevin with three good defenders and DSJ, who can be solid on D when he wants to. I like having Dotson on floor as he can defend and create space because of his outside shooting. Also, Dotson can drive to the basket when he sees daylight. This would also be a unit that can create transition offense off of good defense. Portis can outrun most centers and can hit 3s as the trailer on the break. This unit also allows Morris to play in the post, which is hard for him when he plays with Randle and Robinson. I know what you’re thinking. What about Trier? I will get to him later.

Every team needs a small ball lineup. No one is saying this one is close to Golden State’s “Death Lineup” but could hang with most other teams’ small ball lineups. Randle is one of the strongest Bigs in the game, he can guard any starting center let alone another power forward that is sliding into the five position. Knox has bulked up and can handle most fours for a short stretch. Also, the four might end up being his best position in the future. Having Knox and Dotson stretching the floor creates more driving lanes for DSJ and RJ and leaves Randle a lot of room to operate in the paint. The defense for this lineup wouldn’t be great as there is not rim protector but would be effective against other small ball lineups that would have same issue on defense. Again, you are playing most of your core players together in in roles that fit their skill sets.

In closing, the best approach for this team is to focus on its core players and trust them to develop chemistry. That is why I think it’s best for the Knicks to trade Trier. I love the kid’s heart, but there isn’t a role from him on this team. Knicks are committed to Barrett and Knox at the wing positions. His game doesn’t compliment the other young guys style of play. The only one that benefits from playing with Trier is Frank and that is because he isn’t aggressive on offense, but we all hope that this version of Frank isn’t a finished product. The Knicks need Frank to have the same attitude and aggression on offense that he has on defense, so playing with Trier isn’t good for him in the long run. The truth is the Trier is best suited to be the 6th man on a team in need of bench scoring. I am not saying he is Jamal Crawford, a former Isiah Thomas Knick. But he is a young guy with value that should be traded now for assets. We don’t want to look back and say the same thing about Trier that we say about Jamal Crawford and other former young Knicks. How did we not get anything in return for this guy? Dotson on the other hand might not be flashy, but he is shooting the same percentage from 3 as Ellington is for his career and he is more versatile as he can guard 2s and 3s. He compliments the young core and could be a nice role player on a winning team. While it sounds crazy to trust the young point guards to play better. You can’t give up on DSJ and Frank, they are only 21 years old and have shown flashes of greatness, just look at Markell Fultz in Orlando. The outlook for the Magic has improved dramatically due to Fultz’s play. Success for this season will be measured by the development of the young players, not by total wins from a group of veteran players that won’t be here in two years.  It’s time for the Knicks to trust their young core.