How RJ Barrett Can Become an All-Star in Two Years

RJ Barrett has had a solid rookie season considering the circumstances. He’s on a poorly constructed roster within an organization in deep disarray, yet averages 14.3 points on 40% shooting from the field and 32% from three. His three-point and free throw percentages have steadily improved as the season has progressed, as well.

Ian Begley of SNY reported that the Knicks are ‘optimistic’ about RJ Barrett’s future.

Reportedly, people around the organization were impressed by Barrett’s intangibles and his work ethic but say it’s too early to know if he will be a star in the NBA. Whether or not he’ll become a star is largely dependent on the Knicks, not RJ, because he has all the tools to do so.

The question is whether or not Barrett will become a star for the Knicks, and not some other team, before they ruin the relationship and he demands a trade Kristaps Porzingis style. The question is also whether or not the Knicks have the ability to construct a roster that compliments Barrett’s game to help accelerate his growth.

So far, it’s not looking good. The 2019-20 Knicks roster is poorly constructed and will only hold back RJ’s development if moves aren’t made.

Here are two things the Knicks need to do to ensure RJ Barrett is an All-Star within the next two years, because he has that potential.

More than any other position, the Knicks need a starting caliber point guard that can grow alongside RJ. They aren’t expected to land LaMelo Ball with a projected #6-10 pick in the draft – but they still have some options. 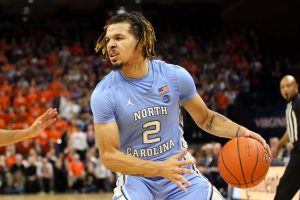 Cole Anthony, Killian Hayes and Tyrese Haliburton could easily fall to the Knicks and have the potential to be starting-caliber point guards in the NBA. Of these three guards, Anthony and Haliburton are the most NBA ready. They’re both solid 3-and-D players that the Knicks could desperately use.

Frank Ntilikina still has a role on this team as a defensive role-player, but he hasn’t solidified himself as the leader that the Knicks need at the point guard position. Elfrid Payton can facilitate, but he hasn’t been the right point guard to help RJ Barrett flourish.

Advanced stats from NBA.com show 29.2% of Payton’s passes were to Julius Randle. Only 13% of his passes were to Barrett. The Knicks need to use their team option on Payton this off-season and draft a point guard to replace him that’s a better fit alongside RJ.

This leads to the next point in helping Barrett become an All-Star within the next two years.

The Knicks signed Julius Randle to a 3-year, $63 million dollar deal last off-season.This contract isn’t terrible, especially with the team option after the second year, but Randle’s game just doesn’t fit with Barrett’s. Randle has had a solid season despite the Beyblade references to his spin moves that resulted in far too many turnovers in the paint. He’s averaging 19.5 points and 9.7 rebounds on 46% shooting from the field but saw his three-point percentage dip to 27.7%. That’s down from 34.4% the previous year with the Pelicans.

Randle has proven he can score consistently from the paint, but he can’t shoot the three and is hardly a playmaker. He’s better suited as a consistent scorer for a more well-rounded team where he isn’t the number one option like he is on the Knicks. It’s difficult for Barrett to shine with Elfrid Payton giving Randle the ball who then steamrolls his way into the paint with his head down. The Knicks need to break up the Payton-Randle duo and form a new one with Barrett and a young point guard.

If they can find a way to package Randle in a trade for young assets, draft picks or a higher pick in the upcoming draft – they should absolutely do so.

RJ’s game will have more freedom and room to grow on a team without Randle and his development should be the Knicks’ number one priority. Everyone knows Barrett has the intangibles to be a star in the NBA, but he also has the savviness and basketball I.Q. to markedly improve quickly in the right situation.

If the Knicks’ new President of Basketball Operations Leon Rose can skillfully maneuver the roster this off-season with a couple of swift moves outlined above, R.J Barrett could easily be an All-Star within the next two years for the Knicks.