If you are like me, you are counting down to 3pm on Thursday. The trade deadline is a highlight of my year.

I literally had it on my phone calendar as soon as the NBA season began. It is the second most important day for NBA general managers beside draft day. One good deadline day can have a massive impact on your team going forward. One bad day can jeopardize jobs and cloud a team’s future. The pressure of that date can make good general managers make decisions they wouldn’t make otherwise.

The New York Knicks need to approach the next deadline as a stepping stone. There is no one trade to fix the Knicks. It will take several years of good decisions and winning gambles to emerge winners.

I scoured the league for players that are available or should be looked to be traded. I put away any Karl-Anthony Towns dreams and any untouchable superstars for this article. I also added complexity by not wanting to overlap players in my trades. So that means no players in one trade is proposed in another. Each trade is constructed to help all teams involved.

I hope you enjoy these three. I tried to make them as realistic as possible.

NY: The Knicks would be adding scoring that they need badly. It is no secret Steve Mills needs to produce wins. Selling hope is a strong factor in keeping his employment. He can sell the fact he is adding a 24-year young player to the roster. Andrew Wiggins has made improvements every year. It’s the high expectations that give the appearance of him being a disappointment. Pairing him with RJ Barrett is a safe play for Steve Mills and the Knicks.

Min: Making Karl-Anthony Towns happy is priority #1 in Minnesota. Their primary target has been D’Angelo Russell for some time. The Golden State Warriors do not want Andrew Wiggins back in a trade. They do not want to commit to any long contracts. So using the Knicks, they can give Golden State real flexibility to make it happen.

GS: D’Angelo Russell probably isn’t in the Warriors’ long term plans. They gain flexible contracts to play with this summer. Bobby Portis contract is only partially guaranteed. Cutting him will result in a nice cost savings. Warriors have a chance to reset their cap by the draft and prevent a massive tax bill by using these Knicks players. They gain a nice pick haul to maneuver trades around the league. They also should be getting a top-5 pick themselves for their own mediocrity. This would set the table to continue their contending status next season when Steph Curry and Klay Thompson returns.

NY: Julius Randle is a good piece at the wrong time. Knicks are looking for a credible youth movement they can sell the fans on. The Knicks can give Marvin Bagley a new start in New York. Dewayne Dedmon is clearly a bench player with a less than desirable contract. Taking on this bad contract is needed to make the deal plausible. Knicks can make Mitch a starter finally and have someone who is okay being a bench player in Dedmon. He brings a different dimension to center than Robinson, which is good.

Sac: Vlade Divac needs to make something happen for Sacramento. His job is definitely on the line. He can’t shake the criticism of passing on Luka Doncic. Bagley is crumbling under the pressure of being picked so early. Sacramento needs to show they can win now. They won’t be making the playoffs this year, but the team needs to show progress. Kings have a fantastic point guard and wing players already. Randle probably puts them into the playoffs next year as a near 20/10 player. They cannot wait for Bagley to flip a switch while decent capable players sit on the bench. Julius Randle is a clear upgrade at PF at this time. Randle’s willingness to pass should be welcome with their extensive list of shooters. Knicks take Dedmon’s bad contract off their hands and fulfill his trade request. 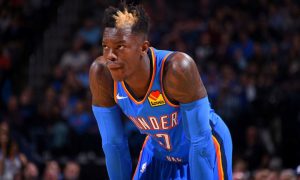 NY: The Knicks gain a competent PG. Dennis Schroeder can finish the year as a starter. He is valuable even if we draft a PG this summer. Darius Bazley is quite a raw talent himself. He fits into the Knicks new youth movement. Knicks would have young players going out and he can find minutes at power forward as well as small forward. He really is a position-less player. The Knicks are finding new homes for two players who are rumored to be wanting out.

OKC: Marcus Morris brings an instant boost to OKC’s offensive weapons. Morris helps Oklahoma City make its final push while Chris Paul is still playing terrific basketball. With a shorter deal, they probably can find a deal for Chris Paul this summer. They can let Gallinari and Morris fall off the books and start over with Shai Gilgeous-Alexander and cap room to start assembling a new roster. This is one last run for OKC before they clean house.

We are only a few days away from this important date. Who do you think management should take interest in?

Watch our Weekly Knicks Podcast below.

theknickoftimeshow - June 27, 2018
0
[soundcloud url="https://api.soundcloud.com/tracks/463814025" params="color=#ff5500&auto_play=true&hide_related=false&show_comments=true&show_user=true&show_reposts=false&show_teaser=true&visual=true" width="100%" height="300" iframe="true" /] We talk about the Draft and selecting Kevin Knox, and Mitchell Robinson . We also talk about the...

Is Melo a true leader?

Every Rose Has Its Thorns

Is Melo a true leader?

Every Rose Has Its Thorns